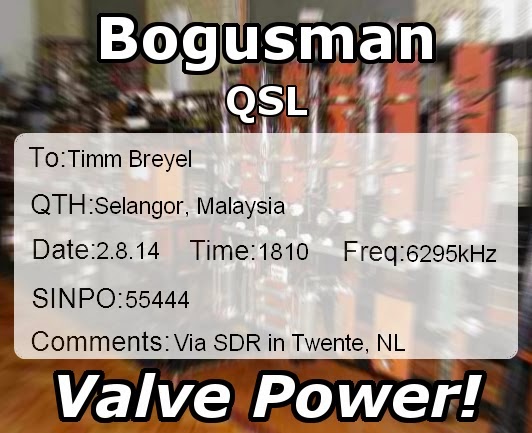 Radio Bogusman* was logged on 2 August 2014 while listening to a remote SDR receiver located in The Netherlands. A very chatty DJ with British accent introduced each song with historical background, then proceeded to spin a number of Progressive Rock songs from the 1970s, including two from the Renaissance album "Turn of the Cards". Reception on 6.295 kHz was S9 / -70 dBm or (SINPO) 55444 -- excellent to good signal strength with slight atmospheric noise and fading. Nevertheless clear and audible speech was noted throughout the broadcast between 18.15 to 19.40 UTC.

Reception report was emailed on the same day to Radio Bogusman. This eQSL was received on 10 February 2015. Thank you, Paul!