QSLs for the Month August 2018 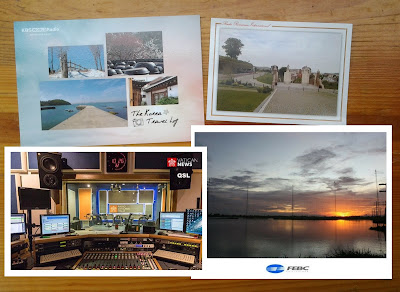 Logbook from Mid-July through Late August 2018

INDIA
All India Radio General Overseas Service via Panaji, Goa was received on the short-wave frequency of 15.770 kHz, under good conditions with a SINPO of 54544. An Indonesian language broadcast with Indian classical music was observed from 09.20 till 09.45 UTC, on 21 August 2018. HERE's AIR (Panaji).

JAPAN
NHK World Radio Japan via Ibaragi-Koga-Yamata Japan was logged on 5 August 2018. A Russian language broadcast of mostly talk and occasional Japanese pop music was heard from 11.00 till 11.30 UTC. Reception on 7.355 kHz  rated a SINPO of: 45444. HERE's Radio Japan.

MONGOLIA
Voice of Mongolia broadcasts in Mongolian and Mandarin were received on the short-wave frequency of 12.085 kHz, under fair conditions with a SINPO of 44333. Mongolian music and talk, station ID and news in Mandarin was noted from 09.55 till 10.15 UTC, on 21 August 2018. HERE's the Voice of Mongolia.

ROMANIA
Radio Romania International, transmitting from Galbeni to South East Asia, was logged on 31 August 2018. An English language broadcast of news about Romania, cultural insights about the country, classical and jazz music performed by Romanians, and mailbag programme was monitored from 03.00 till  03.45 UTC (broadcast time 03,00 till 03.57 UTC). Reception on 11.825  kHz at 03.00 UTC was initially SINPO 43433 -- strong QRM from Chinese station until about 03.03 UTC when it signed off. Fading and atmospheric noise prevailed for much of the broadcast, so much so that by 03.45 UTC signal was 24322.

TAIWAN
Radio Taiwan International was received on the short-wave frequency of 15.320 kHz, under excellent conditions, rating a SINPO 55555. This broadcast on 9 August 2018, from 03.30 till 04.00 UTC, featured segments of "Jade Bells and Bamboo Pipes", hosted by Carlson Wong, featured a segment called "Journey on the Road - French Chapter" and "One More Thing" highlighted parking rage in Taiwan.

TURKEY
Voice of Turkey via Emirler was logged on 24 July 2014. An English language broadcast of news about Turkey and the region, "Review of Turkish Press" and Turkish pop music was heard from 16.30 till 17.20 UTC. Reception on 15.520 kHz rated a SINPO of 45544 -- strong signal, clear audio. HERE's Voice of Turkey.

UK
KBS World Radio via Woofferton was received on the short-wave frequency of 12.065 kHz Reception  rated a SINPO of 45434 -- good signal strength, no interference, clear audio, only slight fading. A Russian language broadcast was heard from 19.50 till 19.00 UTC, on 10 August 2018, HERE's KBS (Woofferton).

Harmony Radio*, presumably located somewhere in England or Ireland, was logged on 18 August 2018.  Their slogan "Beautiful Music...Harmony" was heard interspersed between jazz classics from the 1930s through the 1950s. Tunes from 17.05 till 18.00 UTC included: Louis Prima - "Just a Gigolo", Dean Martin - "Ain't That A Kick In The Head", Frank Sinatra - "Best Things in Life Are Free", "Save Me From This Misery", "If I Only Had Time", Doris Day -"Bewitched, Bothered & Bewildered", "This Can't Be Love", Andrew Sisters - "Got A Gal In Kalamazoo", Ella Fitzgerald & Louis Armstrong - "You Won't Be Satisfied Until You Break My Heart", Bing Crosby - "Embraceable You", Frank Sinatra - "Begin the Beguine". Reception on 6.310 kHz rated a SINPO of 33422 -- clear and audible signal when not fading under noise and occasion utility splash.

VIETNAM
Radio Voice of Vietnam via Hanoi was logged on 26 August 2018. News and developments pertaining to Vietnam, cultural segment on Vietnam a couple of Vietnamese pop songs was observed from 23.30 till 23.58 UTC. Reception on  9.840 kHz rated a SINPO of 54554 – strong and clear signal despite squealing transmitter.

RX Tecsun S-2000 ANT 1/4 wave QTH Malaysia. *Transmission logged from remote SDR receiver at the University of Twente, the Netherlands,
Posted by T.L. Breyel at 3:50 AM No comments: 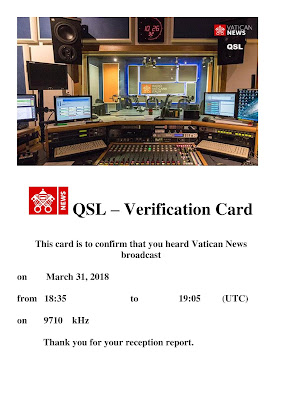 Vatican Radio special Easter broadcast via Santa Maria di Galeria was received on the short-wave frequency of 9.710 kHz, on 31 March 2018, from 18.35 until 19.05  UTC. Reception rated a SINP0 of 45433 -- good signal strength and clarity despite some atmospheric noise and fading. Portuguese programming feature a moderator between various sermons and songs, including "Hallelujah Canto" in Latin with commentary/translation, prayers/hymn, a reading from Book of Genesis in English with translation, and a sermon in Spanish with English translation.

Reception report was emailed on the following day, then follow-up emails were sent a few months later. An eQSL card -- a first from Vatican Radio -- was received on 17 August 2018.

The following message accompanied the eQSL: "Thank you for listening to the Vatican Radio (on short wave our Portuguese language broadcast) and for sending us your reception report. Your report is correct so with a great pleasure we are sending you our email  QSL card. Kindest regards, Liliana Biala, Vatican Radio."
Posted by T.L. Breyel at 9:22 AM No comments: 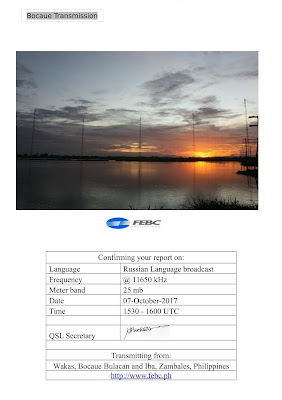 FEBC - Radio Teos, transmitting from Bocaue (Philippines), was heard on the shortwave frequency of 11.650 kHz, under excellent conditions, here in the Kuala Lumpur area, rating a SINPO of 55545. A religious topic in the Russian language was discussed between two men from 15.30 till 16.00 UTC, on 7 October 2017.  HERE's Radio Teos (via Bocaue),

Reception report wasz emailed the following day to FEBC and Radio Teos. It was also ailed to Radio Teos in Russia. Follow-up emails were sent a fe months later. Finally on 17 August 2018, an eQSL and eLetter from FEBC was received. Follow-up eQSL arrived on 11 October 2018. 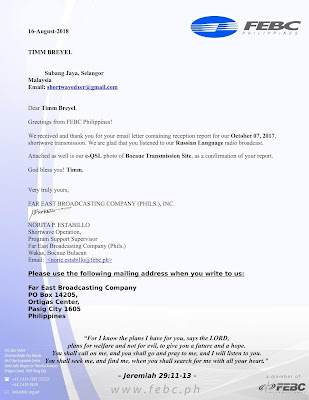 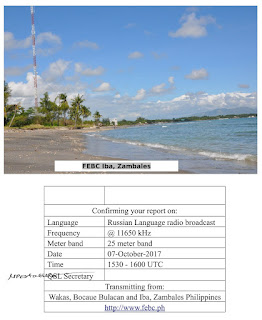 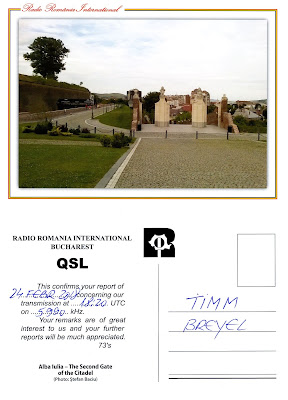 Radio Romania International, transmitting from Galbena (Romania), was logged on 24 February 2018. A Romanian language programme of Romanian Heavy Metal Rock (that sounded like a bit like Dio) was observed from 18.20 till 19.00  UTC. Reception on 5.990 kHz initially rated a SINPO of 44544 -- good signal strength, minor co-frequency interference and fading. By 19.00 UTC signal was much weaker at 24322. HERE's how RRI sounded during this broadcast.

Reception report was emailed on the following day. QSL card and Summer programme schedule was posted with lovely Romanian postage stamps and received on 6 August 2018.
Posted by T.L. Breyel at 5:53 AM No comments: 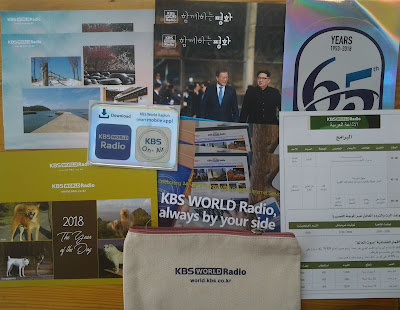 KBS World Radio in a test transmission from UAE was logged on 21 June 2018. Arabic programming with talk and pop music was observed from 20.20 till 20.50 UTC (broadcast time 20.00 till 21.00 UTC). Reception on 6.145  kHz rated a SINPO 24322 -- weak, audible signal and occasionally clear when not fading under atmospheric noise. HERE's KBS World Radio (Dhabbaya)

Reception report was emailed on the following day. Eight QSL cards (4 x 2), Arabic/English programme schedules, stickers and a pencil pouch were received on 6 August 2018. Unfortunately. not one QSL card was completed to verify this reception report.
Posted by T.L. Breyel at 5:47 AM No comments: 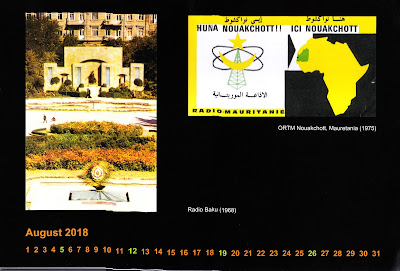 Rhein-Main-Radio-Club Calendar for the month of August 2018
Posted by T.L. Breyel at 10:08 AM No comments: 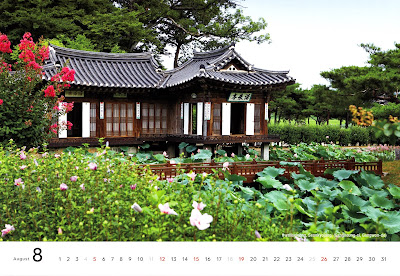