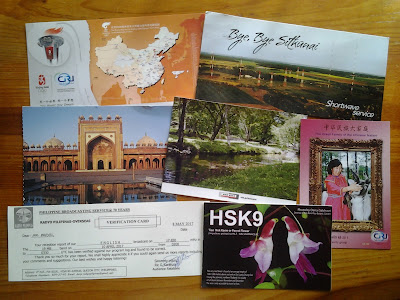 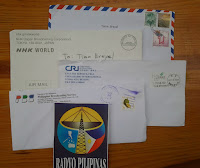 AUSTRALIA
Suspect Australian Broadcasting Corporation (6RN  ABC Radio National), Perth mixing with China station, 810 kHz (MW) after 19.05 UTC. This station seems to be best received around or slightly before 19.00 UTC, but reception is quite poor with a SINPO of 23421.

INDIA
All India Radio Patna in Bihar, monitored from 16.50 till 17.42 UTC with Hindi film music, news/sports/financial reports in English and Hindi. Reception on 621 kHz (MW) rated a SINPO of 34423 -- fair signal strength, with intermittent fading every few minutes, yet audible and clear.

All India Radio Kolkata was observed from 18.25 till 18.55 UTC. Classical Indian music followed by commentary was received on 657 kHz (MW). Reception rated a (SINPO) of 33433 -- fair signal strength with clear audio when not fading (every 2 to 3 minutes).

MALAYSIA
RTM Limbang FM via Kajang is heard on Mondays from 13.00 till 13.45 UTC. News and Malay pop music with announcements relevant to Limbang have been observed. Normally Wai FM operates on this same frequency -- 11.665 kHz -- but a time slot has been allocated for Limbang FM on Monday nights, Malaysian time. Reception is quite good considering my home is approximately 35 kms from the transmitter site.

REPUBLIC OF KOREA
KBS World Radio via Kimjae was heard on 9.640 kHz. An English broadcast of news and Seoul Calling was monitored from 14.00 till 14.30 UTC. Reception rated a SINPO of 55545.

SRI LANKA
Athmik Yathra (AY Radio) via Trincomalee was heard on 1548 kHz (MW). Religious programming, mixed with a few regional songs, along with frequent contact details, was monitored 15.10 till 15.30 UTC.  Reception (SINPO) was 54544 -- strong and clear audio with slight and occasional fading.

Deutsche Welle in a Kiswahili broadcast of news and current event reports was monitored from 15.00 til 15.30 UTC. Reception on 15.275 kHz initially was 55545. However, approximately 20 minutes into the broadcast, fading increased and signal gradually drifted under atmospheric noise.

"Bye Bye Sitkunai", a special broadcast of ShortwaveService via Spaceline (Kostinbrod-Sofia), was logged on 16 April  2017, from 16.25 till 17.00 UTC (broadcast time 16.00 till 17.00 UTC). Lithuanian music along with pre- and post-WWII history of the station was profiled in this long hour programme. Reception on the short-wave frequency of 9.400  kHz was (SINPO)  33433 - poor to fair signal when not fading under transmitter and atmospheric noise. Despite these conditions, the transmission was audible and speech/music clear.

Reception report was initially emailed the day after the transmission, only to be informed shortly thereafter that said reports would only be considered available for QSL if it met the criteria outlined and $$ for postage was provided. I subsequently mailed my report with request sum on 29 May 2017. As promised this lovely QSL card arrived on 23 June 2017.

Before closing I want to thank Mr. Christian Milling for producing and lending his narration to this historic perspective on the Sitkunai site. I have fond memories of first listening to Radio Vilnius in the late 1970s and in more recent years to the relayed broadcasts of RFA and Radio Japan. I thoroughly enjoyed the broadcast and am glad he took the interest to present the history of the Sitkunai site. Thank you so much, Christian! 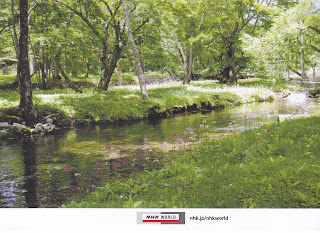 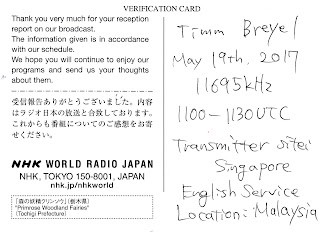 NHK World Radio Japan, transmitting from Kranji (Singapore), was logged on 19 May 2017 with English programming from 11.00 till 11.30 UTC. Reception on  11.695 kHz rated a SINPO 44344 with atmospheric noise and slight fading effecting an otherwise clear and good signal.

Reception report was emailed and submitted online to NHK World on the following day. QSL card arrived in  the mail on 14 June 2017.
Posted by T.L. Breyel at 2:42 AM No comments: 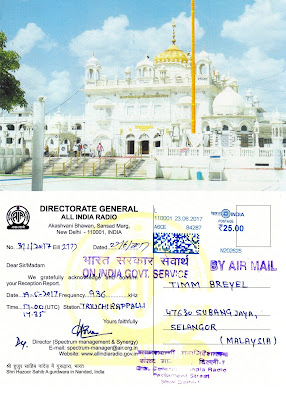 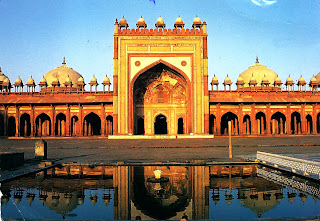 All India Radio Tiruchirappalli in Manapparai, Tiruchirappalli District, Tamil Nadu (India) was logged on 19 May 2017, from 17.00 till 17.35 UTC.  Tamil music, moderated by a male announcer, was observed from 17.00 UTC onward. News in English at 17.30 UTC presented by female announcer, then sign-off at 17.35 UTC.  Reception on 936 kHz (MW) rated a SINPO of 34433 with fair to good signal, occasionally fading every few minutes.

Reception report was emailed and mailed to Spectrum Management & Synergy on the following day. QSL card arrived in  the mail on 14 June 2017. 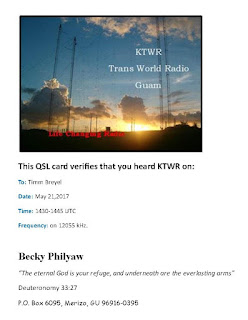 Trans World Radio India via Yerevan Gavar (Armenia)  was logged on 21 May 2017. A Sidar language broadcast featured programming on Christianity and related music from 14.30 till 14.45 UTC, TWR interval was heard just before sign off. Reception on 12.055 kHz rated a SINPO of 44544 - good signal strength, slight transmitter hum and fading, clear and strong audio.

Reception report was emailed on the following day. An eQSL was received on 13 June 2017.
Posted by T.L. Breyel at 10:08 PM No comments: 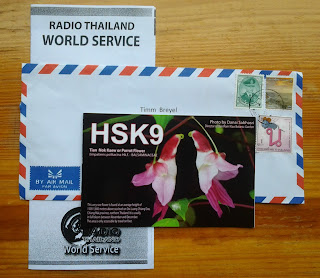 Radio Thailand World Service, transmitting from Udon Thani, was logged on 26 April 2017, from 01.30 till 02.35 UTC. English programming commenced from 2.00 till 02.30 UTC for the US West Coast; before and after these times transmission was in Thai and featured mostly Thai music. Reception on 15.590 kHz rated a SINPO of 55545 -- good signal strength, clear audio, slight fading.

Reception report was emailed on the same day. QSL card with programme schedule arrived in the mail on 8 June 2017. As an added bonus, these came in an envelope with Thailand postage stamps.

Radyo Pilipinas, transmitting from Tinang, was logged on 10 April 2017.  I had the good fortune to hear DZRP Radyo Pilipinas on the short-wave frequency of 17.820 kHz. SINPO rated 45544 -- good signal, clear audio despite fading. Reception was also observed on 15.640 kHz with a SINPO of 55555.

English programming was observed from 02.45 UTC till 03.30 UTC. This particular broadcast  featured "DFA Online" Philippine Embassy/Consulate news; "The Best of Philippines"  profiled the Rizal shrine in Calamba, Laguna;  "School of Filipino", hosted by Edwin Santos, looked at the Filipino phrase for "I'm sorry"; and  "More Fun in the Philippines: Destination Mindanao" highlighted  the "People of the Flood Plain" -- their regional music and festivals in this Muslim autonomous region of Mindanao. Four songs were also played, including one by a group from Kota Bato. Additionally, the broadcast included numerous station IDs. 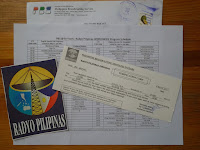 Reception report was emailed on the same day. Shortly thereafter, Radyo Pilipinas replied with confirmation and promised a QSL card. On 7 June 2017, verification card indeed arrived in the mail, along with their programme schedule and station sticker.

Email:
dzrp.radyopilipinas@gmail.com
Posted by T.L. Breyel at 10:36 PM No comments: 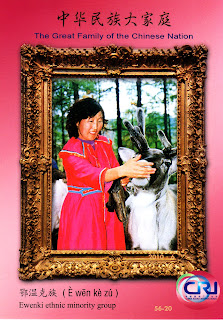 China Radio International Russian service via Kashgar was heard on 13 May 2017, from 09.25 till 10.00 UTC (broadcast time 09.00 till 10.00 UTC). The programme "Muzyka Big Bang" was observed on the short-wave frequency of  15.335 kHz, which rated a SINPO of 55444 -- excellent signal strength and clarity of audio, despite some fading under atmospheric noise. Near the end of transmission, there was some station splatter from an adjacent station (RFA Tibetan service).

Reception report was emailed to both Russian and English service on the family day. QSL card from English service arrived in the mail on 6 June 2017; whereas the Russian service was delivered on 15 June 2017. 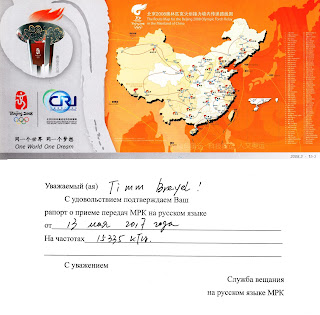 BANGALADESH
Bangladesh Betar was observed on the medium-wave frequency of 693 kHz. Commentary and doa in Bangla was observed at 21.40 UTC. SINPO rated 45554.

INDONESIA
Radio Republik Indonesia Pelambang (PRO-1) in  South Sumatra Province was logged at 18.00 UTC with Quran recitation up until 19.00 UTC, then a listener phone-in programme followed in Bahasa Indonesia.  It should be note the station appears to have been reactivated and broadcast hours extended round-the-clock. Reception on 1287 kHz rated a SINPO of 55545 -- fair to excellent signal when not fading before 18.30 UTC. After that audio was over-modulated and slightly distorted. I mention this only because last year this appeared to be an ongoing problem with RRI Palembang, not Java Radio Station in Semarang. HERE's an excerpt from a Quran recitation.

Radio Republik Indonesia Bandung (Pro-4) in West Java Province was logged at  21.33 UTC during the azan for Fajr. I highlight this fact as the time of an azan can help to identify a predominantly Muslim town/region. Also, the broadcast time is earlier than usual, owing to the month of Ramadan. Reception on 540 kHz rated a SINPO of 34543.

JAPAN
NHK-R1 / JOIK  in Hokkaido was logged on the medium-wave frequency of 567 kHz. Western pop music, news and weather and Western classical music was observed from 17.20 till 18.30 UTC. A SINPO of 23332 was observed -- poor to fair signal strength when not fading (every few minutes), occasionally clear audio despite fading and static bursts from local thunderstorm. One additional note, the frequency opens up after 17.00 UTC, once Thailand/Laos stations have signed off. AIR Dibrugarh is an obstacle too until 17.35 UTC. And occasionally KBS-1 and RTHK-3 (Hong Kong) have been heard mixing at various times with JOIK.

MALAYSIA
RTM WaiFM was logged  from 21.10 till 21.45 UTC with the azan for Fajr, several nasheeds and Malay pop songs. During this period, reception on 11.665 kHz rated an excellent SINPO of 54555. This is understandable given I live slightly over 30km from the transmitter site. But I hasten to add, at certain hours of the day WaiFM on this frequency is buried in atmospheric noise or interference from other short-wave broadcasters.

OMAN
BBC programming in English at 18.35 UTC featured an interview of a Japanese recording artist based in Taiwan, followed by an interview of actress Barbara Leigh-Hunt discussing Alfred Hitchcock and his film "Frenzy", then station ID and news in Arabic at 19.00 UTC. Reception on 1413 kHz was exceptionally strong with SINPO of 45444.  Transmitter is reported to be 800 kWs, so it may be possible to log the station not only in the Middle East, South Asia and South East Asia, but possibly Eastern Europe. HERE's a BBC ID at 18.00 UTC.

PALAU
NHK World Radio Japan  was logged from 14.00 till 14.30 UTC, on the short-wave frequency of  11.705 kHz with SINPO of 44444 -- good signal and audio, slight co-frequency interference when signal faded under. Around 14.29 UTC, some station splatter observed from Vatican Radio on 11.700 kHz. This English broadcast featured news about Japan and the programme "Welcome to Amazing Japan" that profiled the Ainu people of Hokkaido. 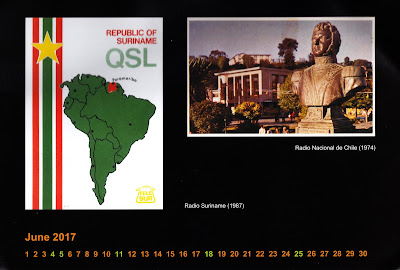 The Rhein Main Radio Club Calendar for month of June 2017
Posted by T.L. Breyel at 7:35 AM No comments: