QSL Cards for Month of January 2020 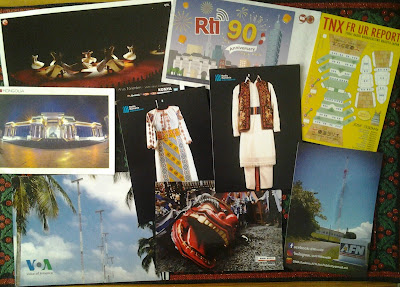 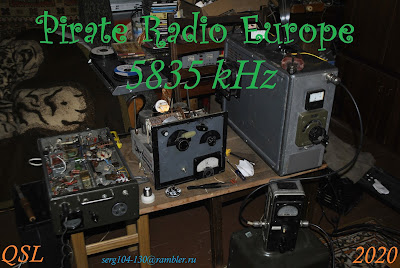 Pirate Radio Europe*, transmitting somewhere in Ukraine, was heard on 25 January 2020. Ukrainian Rock music and station ID in multiple languages with contact details was monitored from 19.40 till 20.00 UTC. Reception on  the short-wave frequency of 5.835 kHz rated a SINPO of 34323 -- weak to fair, occasionally clear despite atmospheric noise and long fades. HERE and HERE is Pirate Radio Europe (Ukraine).

Reception report was emailed the following day. Veri-signer Serge replied with eQSL cards of the transmitter, his assistants and he on 30 January 2020. 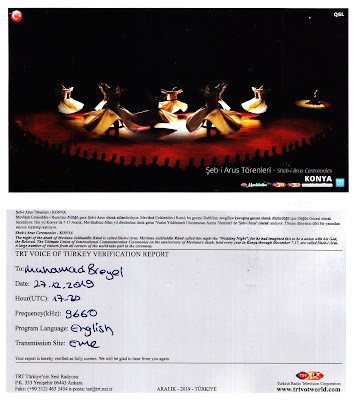 Voice of Turkey was heard on 27 December 2019, from 17.30 till 18.25 UTC. News, press reviews, segment on tourist attractions and Turkish pop music was observed during this broadcast. Reception on the short-wave frequency of 9.660 kHz rated a SINPO of 45444.

Reception report was emailed on the following day. This QSL card and seasons greeting card that depicts the English announcers for VoT arrived in the mail on 22 January 2020. 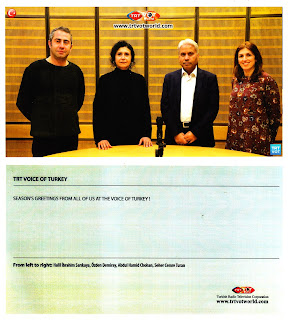 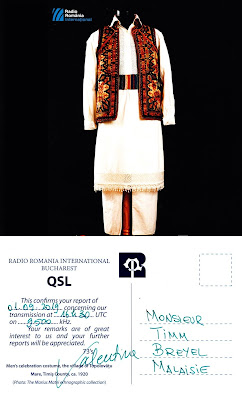 Radio Romania International, transmitting from  Galbeni-Bacau, was logged on 1 September 2019. A French language broadcast of jazz and classical music was monitored from 16.30  till 16.57 UTC. Reception on the short-wave frequency of 9.500 kHz rated a SINPO of 44434 fair to good signal, clear audio content and occasional fading despite co-frequency interference from Trans World Radio (TWR) in Africa. At 16.50 UTC, SINPO was degraded to 12321 - the signal was barely audible under TWR. HERE is Radio Romania International.

Reception report was emailed on the following day to  the French serice of Radio Romania. QSL card arrived in the mail on 22 January 2020.

BALI (INDONESIA)
Radio Seribatu* in Vila Bambu Wayan Balik, Seribatu Masplling, Seribatu, Bangli was logged on 20 January 2020. This is one of three FM/online stations monitored from 04.30 till 05.10 UTC (12.30 till 13.10, Bali Time). Gamelan music with station IDs every 15 minutes, and station details on the hour in Bahasa Indonesian, was observed during thisperiod. For my part the station was received via their internet SITE. Within an hour of contacting the station, Mark Fahey replied with a fact sheet about the stations and their objective. He also promised a QSL would be sent in a couple of weeks.

INDIA
All India Radio Sambalpur (Akashvani Sambalpur) via Maneswar, Sambalpur District, Orissa, was logged on 18 January 2020. South Asian music (i.e. classical Indian music?) was monitored from 16.35 till 17.05 UTC. Reception on the medium-wave frequency of 945 kHz rated a SINPO of 24422 -- weak to fair signal and clear audio content when not fading and mixing with co-frequency station in Thailand. On this particular night neighbouring AIR stations on 900 kHz, 927 kHz and 945 kHz were also received, at the same time, with the same programming. HERE is AIR Sambalpur.

JAPAN
Radio Nikkei 1 via Chiba Nagara was logged on 23 January 2020. This all Japanese language broadcast featured pop music performed by a female singer from 10.35 to 11.00 UTC. Reception on 6.055 kHz rated an SINPO of 35433 - fair signal, clear audio despite fading. HERE is Radio Nikkei 1 .

KUWAIT
Radio Free Asia via Sulaibiyah was received on 6 January 2020. A Lao broadcast of news and current events was heard from 00.00 till 00.30 UTC. Reception on 9.910 kHz was SINPO 45444 -- good signal strength and audio quality, no interference, slight fading. Fortunately RFA's Lao, Vietnamese, Burmese and Korean programmes are not jammed the way their Mandarin, Uigher and Tibetan broadcasts tend to be, and the culprit, winkie-wink, is China.  HERE is RFA (Sulaibiyah).

MADAGASCAR
World Christian Broadcasting - African Pathways Radio (KNLS) via Mahajanga was heard on 4 January 2020. Profiles in contemporary Christian music and Bible analysis was noted from 03.45 till 03.58 UTC. Reception on the short-wave frequency of 13.760 kHz rated a SINPO of 33443 -- fair signal, some co-frequency interference from Voice of Korea, clear audio content although signal occasionally faded under atmospheric noise.

MALDIVES
Voice of Maldives (Dhivehi Raajjeyge Adu) via Thilafushi was heard on 12 January 2020, from 18.40 till 19.30 UTC (23.40 till 00.30, Maldives time). A phone-in programme in Dhivehi mentioning "Mariam", South Asian music, advertisements/promotions, commentary on Education Ministry of Maldives with station IDs announcing MW and FM frequencies was observed during this period. Reception for this 25 kW station which was testing its new medium-wave/analog transmitter on 1449 kHz was SINPO 35433 - fair to good signal strength, clear and discernible audio content, no interference, only slight fading for less than a minute. Station was, after many nights of listening, to be best heard after IRIB signs off. HERE is Voice of Maldives.

SOUTH KOREA
KBS 1 - HLKN via Yeongam-gun was logged on 30 January 2020. Female and male announcers in discussion, followed by K-pop tune was noted from 17.45 till 18.00 UTC. Reception on 1467 kHz rated 34423 --  weak to fair signal strength as transmission continued at the top of the hour, occasionally clear and discernible content when not fading under atmospheric noise. Before 17.45 UTC, QRM from AIR Jeypor and before 17.00 UTC QRM from Radio Republik Ranai. HERE is KBS 1 - HLKN (Yeongam-gun).

INDONESIA
Voice of Indonesia via Cimanggis (Jakarta) was logged on 21 January 2020. Station jingle and ID was caught just before 15.00 UTC. Reception on 4.750 kHz was 35433 until about five minutes later when Bangladesh Betar switched on its transmitter. HERE is VOI (Cimanggis).

TAIWAN
Fu Hsing Broadcasting Station (Fùxīng Guǎngbō Diàntái) in Taipei was logged on 17 January 2020. A radio drama/opera with traditional Chinese music was monitored from 18.35 till 19.05 UTC (02.35 till 03.05, Taiwan time). Reception on the medium-wave frequency of 909 kHz was SINPO 24432 -- weak to fair signal and clear audio content when not fading and mixing with another co-frequency station before 19.00 UTC. This station was received and QSLed many years ago on short-wave. Hopefully I am as lucky with their MW transmission. HERE is Fu Hsing Broadcasting Station.

Radio Taiwan International via Paochung was heard on 16 January 2020, from 03.00 till 04.00 UTC. News, current event reports from "Hear in Taiwan" and cultural programmes "Ear to the Ground" and "Jade Bells and Bamboo Pipes" was observed during this period. Andrew Ryan's report on the search for the "colour yellow" in Taiwan and Carlson Wong's segment on traditional New Year songs of Taiwan's indigenous tribes -- the Ami, Puyuma, Kanakanavu and Truku -- was of particular interest. Reception on the short-wave frequency of 15.320 kHz was SINPO 55544 -- good signal strength and audio quality, no interference, slight fading. At 03.59 UTC, slight QRM from Chinese station mixing under RTI's signal.

TURKEY
Voice of Turkey via Emirler was logged on 4 January 2020. National and World news including reports about the assassination of Iranian General Qasem Soleimani by American forces and his funeral in Iran, flooding in Jakarta (Indonesia), "Turkey's Tourist Attractions," "The Letterbox Programme" and as always lots of contemporary Turkish musis was observed from 17.30 till 18.25 UTC. Reception on 9.660 kHz rated a SINPO of 45454 -- good signal strength and clear audio quality with no disturbing interference. 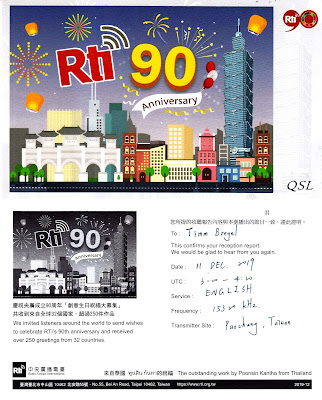 Radio Taiwan International via Paochung was received on 11 December 2019. Their English language broadcast to Asia was monitored from 03.20 till 04.00 UTC. During this period the programmes "Hear in Taiwan," "Chinese to Go," "Hashtag Taiwan" and "Status Update" were observed. Reception on the shortwave frequency of 15.320 kHz was SINPO 55544 -- excellent reception despite minor fading.

Reception report was emailed and submitted online on the same day. QSL catd arrived in the mail on 14 January 2020.

Voice of Mongolia (via Ulaanbaator) 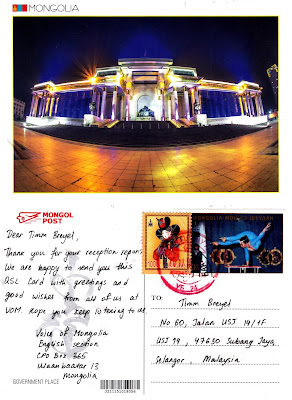 Voice of Mongolia, transmitting from Ulaanbaator, was received on 29 September 2019. This English language broadcast, featuring Mongolian music performed on the international stage, was observed from 09.00 till 09.30 UTC. Reception on the shortwave frequency of 12.085 kHz rated a SINPO of 44444 -- strong signal and clear content, despite some over-modulation and fading. HERE and HERE is VoM.

Reception report was mailed and emailed on the following day. This is apparently a follow-up QSL card which was received on 14 January 2020. The postage stamp is a bonus as well. 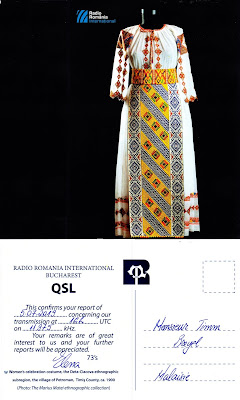 Radio Romania International via Galbeni-Bacau was monitored on 15 June 2019. English programming was observed from 03.45 till 03.56  UTC. Reception  on 11.825 kHz was SINPO 25332 -- weak signal, atmospheric noise and fading, despite the poor conditions signal was occasionally audible and clear. On previous days, after 03.00 UTC, signal was  better at 35443.

Reception report was emailed on the following day. This was an additional QSL card  that arrived in the mail on 7 January 2020. 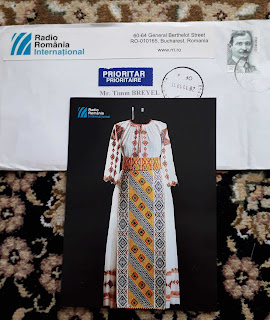 Voice of America (via Doraleh) 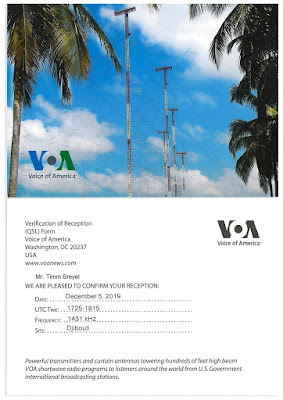 Voice of America, transmitting from Doraleh,  Djibouti, was heard on 5 December 2019. Arabic programming of current event reports and music was observed from 17.25 till 18.15 UTC. Reception on the medium-wave frequency of 1431 kHz  at 17.30 UTC rated a SINPO of 25422 -- weak but clear content when not fading under atmospheric noise every few minutes. After 18.00 UTC, signal was present but barely audible with next to no discernible content except for faint speech and music. HERE is VOA Djibouti.

Reception report was emailed to VOA and IBB on the following day. This eQSL arrived on 7 January 2020. 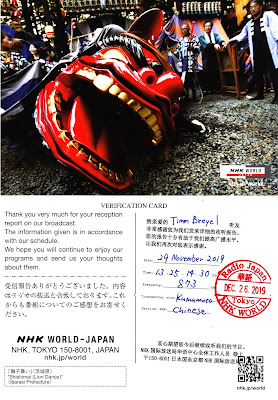 Nippon Hoso Kyokai  2 (JOGB)  via Kumamoto, Japan was logged on 29 November 2019. A selection of language programmes in Japanese/Chinese, Japanese/Portuguese and Japanese/English was monitored from 13.25 till 14.30 UTC. Reception on the medium-wave frequency of 873 kHz was fair SINPO 33432 - fair to good signal with clear audio content, fading every few minutes, occasionally mixing with stations in India and China. HERE is NHK2-JOGB.

Reception report was sumitted online and posted to the station on the following day. Acknowledgement, cartoon mascot stickers and promotional programme postcards arrived in the mail on 7 January 2020. A follow-up QSL card arrived on 22 January 2020. 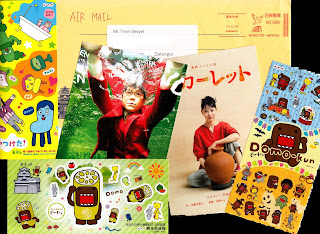 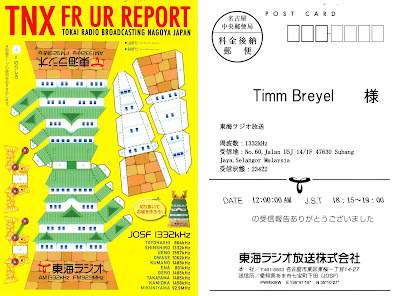 Tokai Radio Hoso (JOSF) in Nagoya, Japan was received on 2 December 2019 (3 December 2019, JST), from 18.15 till 19.00 UTC (03.15 till 04.00, JST) with a selection of Japanese pop songs. Recption on the medium-wave frequency of 1332 kHz rated a SINPO of 23422 -- weak to fair signal mixing with another station (presumed to be in China) throughout the transmission, occasionally clear signal rising above atmospheric noise, static bursts (from a local thunderstorm) and the aforementioned interfering station. HERE is Tokai Radio Hoso-JOSF.

Reception report was submitted online and posted to station on the following day. QSL card and programme schedules arrived in the mail on 7 January 2020. 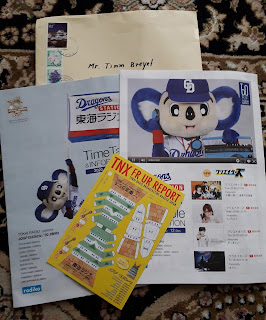 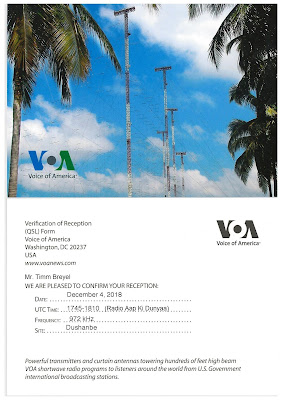 Reception report was emailed to various email addresses over a two day period. An eQSL arrived on 31 December 2019.
Posted by T.L. Breyel at 6:57 AM No comments: 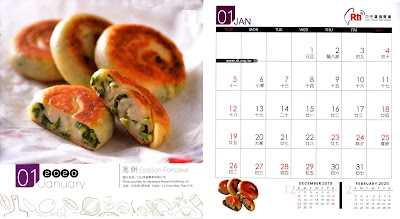 Radio Taiwan International Calendar - January 2020
Posted by T.L. Breyel at 6:56 AM No comments: