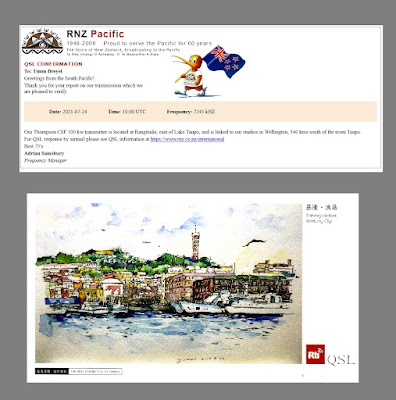 Radio New Zealand Pacific, transmitting from Rangitaiki, New Zealand was logged on 24 July 2021. An English language broadcast of talk, music and news was observed from 09.50 till 10.05 UTC, here in the Kuala Lumpur area. Reception on  7.245 kHz rated a of SINPO: 25442 -- Poor to fair signal strength, audio content occasionally coherent, despite weak signal and slight fading. HERE is RNZ Pacific.

Reception report was submitted online through RNZ's QSL form on 25 July 2021. This eQSL (which is the verification 'card' for all RNZ broadcasts) was received on 26 July 2021. 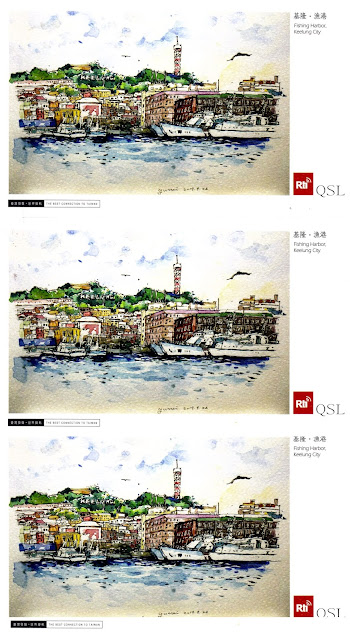 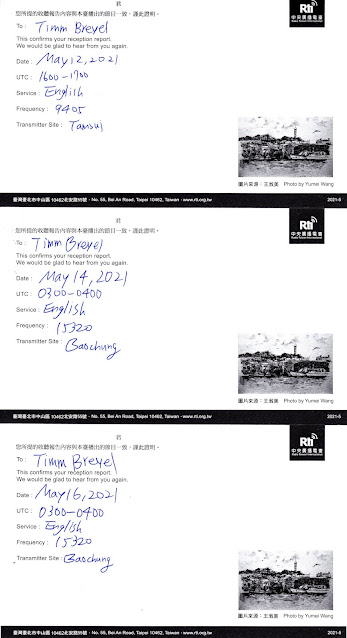 In Stamps: Who Invented The First Radio?

Who invented the first radio? Alexander Stepanovich Popov, Guglielmo Marconi or Jagadish Chandra Bose? All three men were contemporaries and were aware of the electromagnetic studies by Heinrich Rudolf Hertz, James Clerk Maxwell  and Oliver Lodge, each of whom contributed to the basis of radio communications. But they did not apparently see the value in developing a communication system based on electromagnetic waves. So, if not these men, then who can claim to have 'the first' such apparatus? Well, if based on national pride, then the nation of each man makes the claim -- Russia, Italy (Ireland too, as Marconi was half Irish) and India (Bangladesh, as Bose was a Bengali). However,  in the final analysis, it is the official documentation that awards the inventor the title of being 'the first". That said, the stamps below from Russia, San Marino and India honour each of these radio pioneers/inventors. 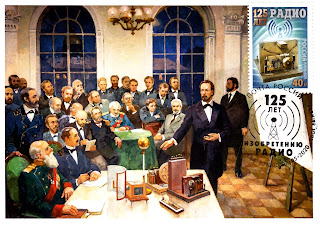 The 1895 radio depicted on this stamp is on exhibit at the A.S. Popov Central Museum of Communications named after him. The maxi card is one of only 10 printed and shows the Russian Physicochemical Society meeting when Popov first presented his invention.
SAN MARINO POST in 1995 issued a first day cover stamp marking the 100 anniversary  of the invention of radio by Guglielmo Marconi. This 850 Lira stamp was jointly released not only in San Marino, but also Germany, Ireland and Italy in the same year. 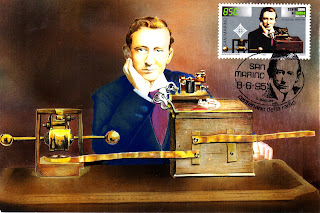 Now, who invented the radio? There is no simple answer to the question. While the invention of radio seems to have been about the same time -- in the late 1890s -- the claim can be made by not only Popov and Marconi but also Jagadish Chandra Bose. First off, Alexander Stepanovich Popov was a contemporary of Guglielmo Marconi, but the two men developed their radio apparatuses independently and without knowledge of the other’s work. Making a definitive claim of who was first is complicated by inadequate documentation of events, conflicting definitions of what constitutes a radio, and national pride.
One of the reasons why Marconi gets the credit and Popov doesn’t is that Marconi was much more savvy about intellectual property. One of the best ways to preserve your place in history is to secure patents and publish your research findings in a timely way. Popov did neither. He never pursued a patent for his lightning detector, and there is no official record of his 7 May 1895 demonstration. He eventually abandoned radio to turn his attention to the newly discovered Röntgen waves, also known as X-rays. 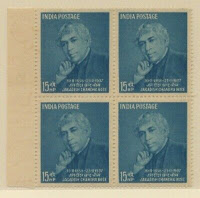 Marconi, on the other hand, filed for a British patent on 2 June 1896, which became the first application for a patent in radiotelegraphy. He quickly raised capital to commercialise his system, built up a vast industrial enterprise, and went on to be known — outside of Russia — as the inventor of radio.
Lastly, Sir Jagadish Chandra Bose like Popov did not file a patent. In fact, Marconi and he met about the time Marconi demonstrated and patented his radio. Professor Bose however is recognised as the inventor of semiconductors and microwave technology. 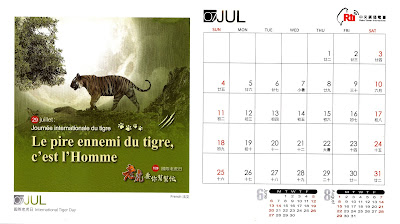