Like Station 1494, an affiliate of Mass Communications Organisation of Thailand -- MCOT, in Bangkok, Thailand was heard on 11 May 2016.  A Thai language broadcast featuring a selection of old Western Pop songs was heard from 16.35 till 17.05 UTC (11.35pm till 12.05am, Thailand time).  Reception on the medium-wave frequency of 1494 kHz was (SINPO) 34433 -- fair to good signal strength audio and clear audio when signal did not fade (every four to five minutes.

The station is quite powerful in the evening hours and stands out for its music format. In just the hour or so I listened the station played songs by the O'Jays Rolling Stones, Michael Learns to Rock, Charlie Rich,  Ray Stevens and similar oldies from the Seventies and Eighties. It's rather strange to be tuned to MW in Malaysia and hear this kind of music playing on one's car radio, especially from Thailand! 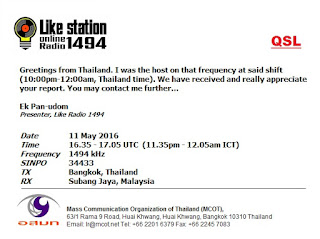 Reception report was emailed to MCOT shortly after transmission closed. This may be another futile attempt to QSL a Thai station but will give it a try anyway. On 8 June 2016, the Presenter, Ek Pan-udom, who was on-air at the time confirmed reception of Like Station 1494. On 19 June 2016, Ek Pan-udom posted my letter on his Facebook page (some acknowledgement of reception report). Thank you very much! 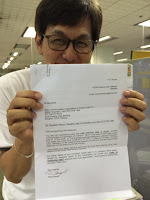 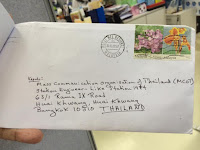