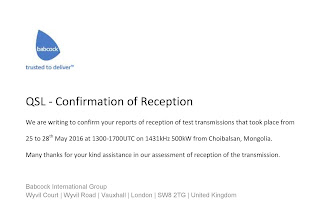 Mongolia Medium-Wave Test Transmission in Choibalsan, conducted reportedly by Babcock, was heard on 25 and 26 May 2016, here in the Kuala Lumpur area -- a distance of 5,021 km! Alternating 400Hz to 1Khz audio tones/pulses and voice IDs in English were detected from 15.00 till 15.30 UTC. Reception on the medium-wave frequency of 1431 kHz was (SINPO) 23432 -- weak to fair strength when not fading, high to low tones/pulses and voice communication were audible and clear when signal peaked. Co-frequency interference from a station in Thailand mixed occasionally with signal. No transmission was observed before 15.00 UTC.  HERE and HERE is how this test sounded in Malaysia.

Mongolia is reportedly testing a new MW transmitter (with power between 500 kW). Transmission target is primarily the Korean peninsula. Test will be conducted from 25 till 28 May 2016,  13.00 to 17.00 UTC. 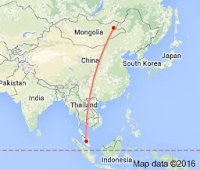 Reception report with MPP3 audio files were emailed and uploaded to Dropbox on 26 May 2016. Will Babcock QSL? One BCLer reports they will not verify since this is not a "DX test". This remains to be seen. BBC/Babcock via Woofferton periodically conducts transmitter tests and have QSLed in the past. eQSL arrived on 5 July 2016.

NOTE: MP3 audio files would be appreciated, in mono, no less than 32kbps, and no longer than 30 minutes. File name should be the sender's initials - day - time.mp3 (for May 25 at 11pm: "XX-25-1100.mp3). If uploading to the Dropbox, please send an e-mail to the above address stating your listening location as well. If possible, do not set the receiver bandwidth to narrow, but wide AM (at least 6kHz for example).