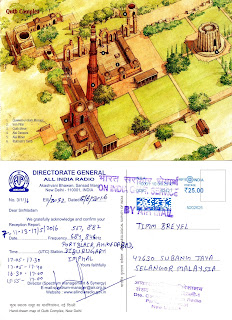 All India Radio Port Blair (Akashvani Port Blair), Delanipur, Adaman & Nicobar Islands (India) was monitored during the week of 2  through 7 May 2016 on the medium-wave frequency of 684 kHz. Almost without fail, their signal was observed as early as 12.15 UTC and well up until 17.30 UTC (sign-off). While their transmitter consistently radiated a strong signal, one major problem persisted -- China Radio International in Hainan Province. CRI's 600+ kW transmitter operated on the same frequency up until around 17.00 UTC and overpowered Akashvani Port Blair's signal except during periods of fading. After 17.00 UTC, Akashvani Port Blair was strongly received without fading.

Interestingly, Akashvani Port Blair is observed on the short-wave frquency of 4.760 kHz, and it radiates well into Malaysia as well. Progmming appears to be simulcast It is not plagued with the QRM, but the signal strength is slightly less compared to their MW transmission.  For purposes of receiving their QSL, a reception report was submitted for their MW broadcast on 7 May 2016, from 17.00 till 17.30 UTC.

HERE's how Akashvani Port Blair (along with CRI interval) sounded on MW.

Reception report, along with audio files, of Akashvani Port Blair's MW broadcast on 2 and 7 May 2016 was emailed to Spectrum Management and the station. A letter followed and was posted on 8 May 2016.QSL card arrived in the mail on 27 June 2016, verifying not only Port Blair (Adaman & Nicobar Islands), but also Ahmedabad (Gujurat),  Diburugarh (Assam) and  Imphal (Manipur).