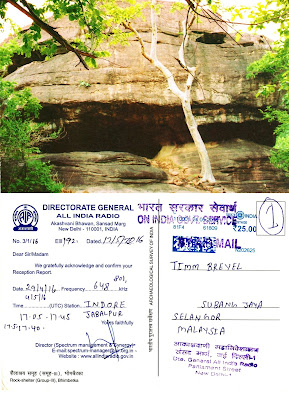 All India Radio Jabalpur  (Akashvani Jabalpur), Madhya Pradesh was logged on 4 May 2016. Indian music consisting of duets between female and male singers, followed by news in English and Hindi was heard from 17.05 till 17.40 UTC (11.35 pm till 12.10 am, India time).

Reception on the medium-wave frequency of 801 kHz was (SINPO) 24432 -- weak to fair signal strength, clear and audible speech for approximately two minutes between fading. Periods of fading lasted every five to six minutes which prevented reception of signal. Reception was not possible before 17.00 UTC due to strong interference from Radio Republik Indonesia Semarang (in central Java). Some minor interference from a station in China was heard when their signal faded under. On previous days, reception was not much better using a Panasonic RF-B45 and Sangean ATS-909, with both relying on only the internal ferrite rod antenna.