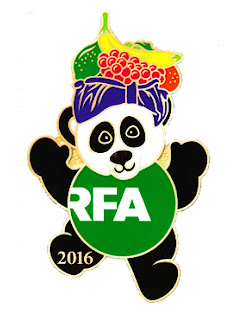 To commemorate the 2016 Summer Olympic Games in Rio de Janeiro,  Radio Free Asia (RFA) is introducing a special verification card. This new design shows an adaptation of RFA’s first panda design originally used for the 2008 Beijing Olympics. This updated version of the original design adds a hat made of various fruits. The fruit hat was popularised in the 1900’s by Brazilian singer and actress, Carmen Miranda. This is their 61st QSL and it will be used to confirm all valid reception reports from May through August 2016. 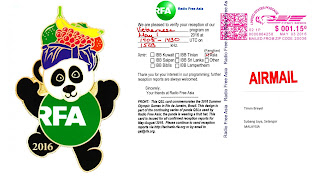 Radio Free Asia, transmitting from presumably Fangliao (Taiwan), was logged on  1 May 2016. A Vietnamese language broadcast of current events relating to Vietnam was monitored from 14.05 till 14.30 UTC. Reception on the medium-wave frequency of 1503 kHz was (SINPO) 44434 -- good signal strength, clear and strong audio, fading every few minutes but still audible.

Reception report was emailed to RFA on the same day. A few days latter a report was submitted to Radio Dap Loi Song Nui, which I doubt will reply.