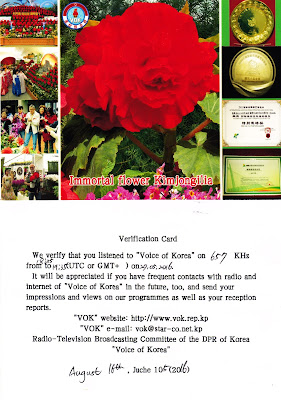 Pyongyang Broadcasting Station, transmitting from Kangnam-gun (Pyongyang), was logged on 27 May 2016, here in Kuala Lumpur -- a distance of 4,553 km! A Korean language broadcast consisting of uninterrupted patriotic music, both vocal compositions in the operatic style and martial type instrumentals, all of five songs and station ID on the half hour, were observed from 18.55 till 19.35 UTC and onward. Reception on the medium-wave frequency of 657 kHz was (SINPO) 35333 -- fair to good signal strength (no surprise there for this 1500 kW monster), no QRM, only severe static crashing due to local thunderstorm and fading three to four minutes apart. 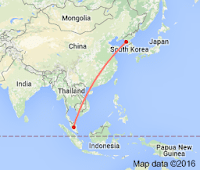 Reception report was mailed on the following day. QSL card arrived on 28 September 2016. Along with the PBS card I received a Kim Jong Il booklet  entitled "On Preserving the Juche Character & National Character of the Revolution and Construction" and a copy of "The Pyongyang Times". 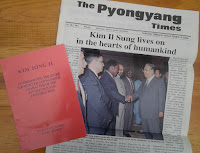