Voice of America / BBG (via Pinheira) 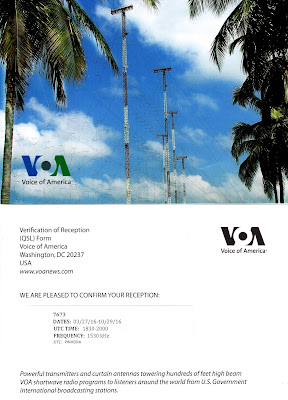 Voice of America via BBG in Pinheira was heard in the Kuala Lumpur area on 24 May 2016. A French language broadcast featuring a  series of news reports/commentary was heard from 18.50 till 19.20 UTC.  Reception on the medium-wave frequency of 1530 kHz was (SINPO) 34433 - fair to good signal strength, some co-frequency mixing with a station in the Middle East, fading every 3 to 4 minutes

This is the same station I received a QSL letter from earlier this month when they were logged from a remote receiver (Twente) in the Netherlands. At the behest of a fellow DXer I was advised to try listening from 18.00 UTC onward, DIRECTLY from Malaysia. Surprise! Surprise! Not only did I catch VOA/BBG in Pinheira, Democratic Republic of São Tomé and Príncipe, I received it under exceptionally good conditions. 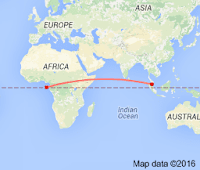 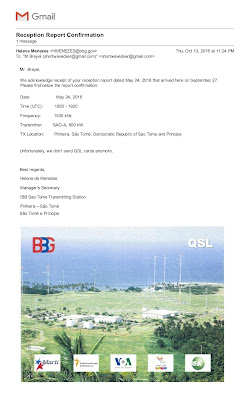 Reception report was emailed to VOA and BBG on the following day. On 28 May 2016, VOA emailed to say: "Your report has been received and should be processed within the next few days." QSL card arrived in the mail on 21 July 2016. An eQSL from Station Manager arrived on 13 October 2016.