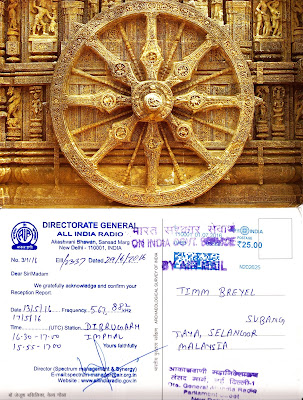 Reception on the medium-wave frequency of 567 kHz was (SINPO) 33422 weak to fair with clear audio when not fading  (every 3 to 4 minutes), Co-channel QRM from Lao National Radio (LNR) prevented decent reception of Akashvani Dibrugarh before 16.30 UTC. Although I hasten to add, Akashvani Dibrugarh was heard as early as 15.00 UTC mixing with and under LNR.

Reception report was emailed and FB messaged to Akashvani Dibrugarh on the following day. A letter to Spectrum Management followed a few days later.QSL card arrived in the mail on 27 June 2016, verifying not only Diburugarh (Assam), but also Imphal (Manipur),  Port Blair (Adaman & Nicobar Islands), Ahmedabad (Gujurat).A follow-up QSL card for Diburugarh (Assam) and Imphal (Manipur) arrived in the mail on 2016.