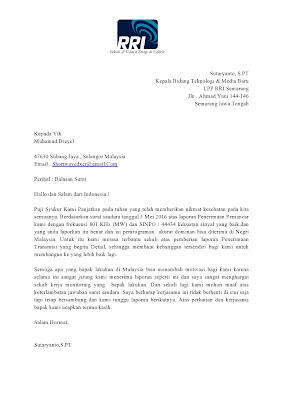 Radio Republik Indonesia Semarang (Pro-1) in Central Java was logged on 4 May 2016.  A selection of several old Indonesian songs, hosted by a male DJ, then announcement of transmission closure and national anthem was heard from 16.00 till 17.00 UTC (broadcast time 11.00 pm till 12.00am, Java time).

Reception on the medium-wave frequency of 801 kHz was (SINPO) 44434 -- good signal strength with occasional and minor fading, but generally audible throughout the transmission. Terrible transmitter droning was observed whenever signal faded under. While AIR Jabalpur and a station in China operate on the same frequency, their presence was not observed until after 17.00 UTC; RRI Semarang remained the dominant signal. RRI Semarang  was observed signing on the following day, first with transmitter switched-on at 21.25 UTC, then interval and ID at 21.30 UTC. 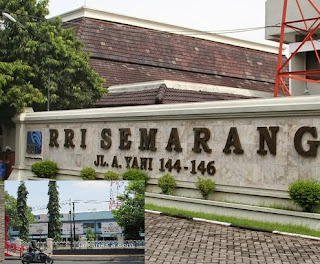 Possibly -- although not 100% certain --  Sabah FM (Kudat, East Malaysia) was heard at 21.05 till 21.20 UTC, until it dropped off. Islamic programming in Bahasa Malaysia was heard during this time. Queries to RTM were emailed to various personnel, but no official word has been forthcoming. If indeed Sabah FM as reported by Asiawaves Net, it remains the last MW station in Malaysia. A Thailand and possibly China or Taiwan station was also observed at around 21.15 UTC, but again RRI Semarang remained the prominent broadcaster.

Reception report was messaged to RRI Semarang FaceBook page, and a simple acknowledgement of "Terima kasih" (thank you) was received a day later. The only known and listed email address bounced. So, a follow-up report with sound files was sent by mail in subsequent days. A QSL letter from RRI Semarang was emailed on 15 June 2016. Terima kasih, RRI Semarang!!!
Posted by T.L. Breyel at 11:38 PM