CKZN* in St. John's, Newfoundland (Canada)  was received on 7 May 2016, from 04.00 till 04.30 UTC, here in the Kuala Lumpur area, using the SDR receiver at the University of Twente in The Netherlands. A programme called "Monocle Daily" was observed during this broadcast. It featured a series of current event reports, among these an analysis of the candidates in the US Presidential campaign. 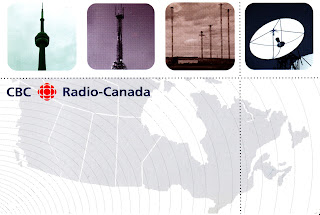 Reception on 6.160 kHz was (SINPO) 24322 -- weak signal, fading under atmospheric noise, yet audible with occasionally clear speech. At 4.30 UTC, station splatter from PBS Sichuan (?) in China strongly degraded reception and eventually CKZN disappeared under the noise.

For many years, usually in the winter months and under a grey-line path over the Arctic, I have attempted to catch CKZN directly in Malaysia, but with no success. CBC Radio Nord and Radio Canada International in Sackville, New Brunswick were usually received under these conditions. So, I will keep trying, and hopefully CKZN -- one of two remaining short-wave stations (excluding CHU) in Canada -- will be heard one day.

Reception report was submitted online, emailed and posted to CKZN. Larry Wartman and Terry Brett (Systems Technologist, Transmission, Newfoundland, Canada) replied with emails on 30 May 2016, approximately an hour apart. The former mentioned a QSL was mailed to my address while the latter attached a   photocopy of their original card. Hopefully now an actual card will materialise in the mailbox in the coming weeks. The promised QSL card from Larry Wartman was received on 16 June 2016. Thank you Larry and Terry!!! 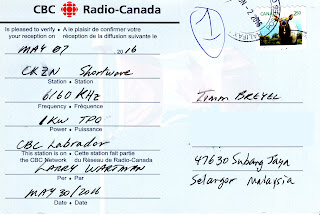