PCJ Radio International honoured Victor Goonetilleke with a special QSL (verification card) commemorating their Fifth Anniversary on 12 March 2014.  For more than 40 years Victor has made invaluable contributions to international broadcasting. He has provided work for the Voice of America, BBC World Service and many others. For over 24 years he was a regular contributor to Media Network on Radio Netherlands. Like many great men he was often unknown to many listeners, but his work helped get the signals of these stations into the radios of listeners across Asia and beyond. In recent years Victor has been PCJ Radio International’s frequency manager. So, for the Fifth Anniversary of PCJ Radio International, a special QSL was developed to highlight his contributions to international shortwave broadcasting. 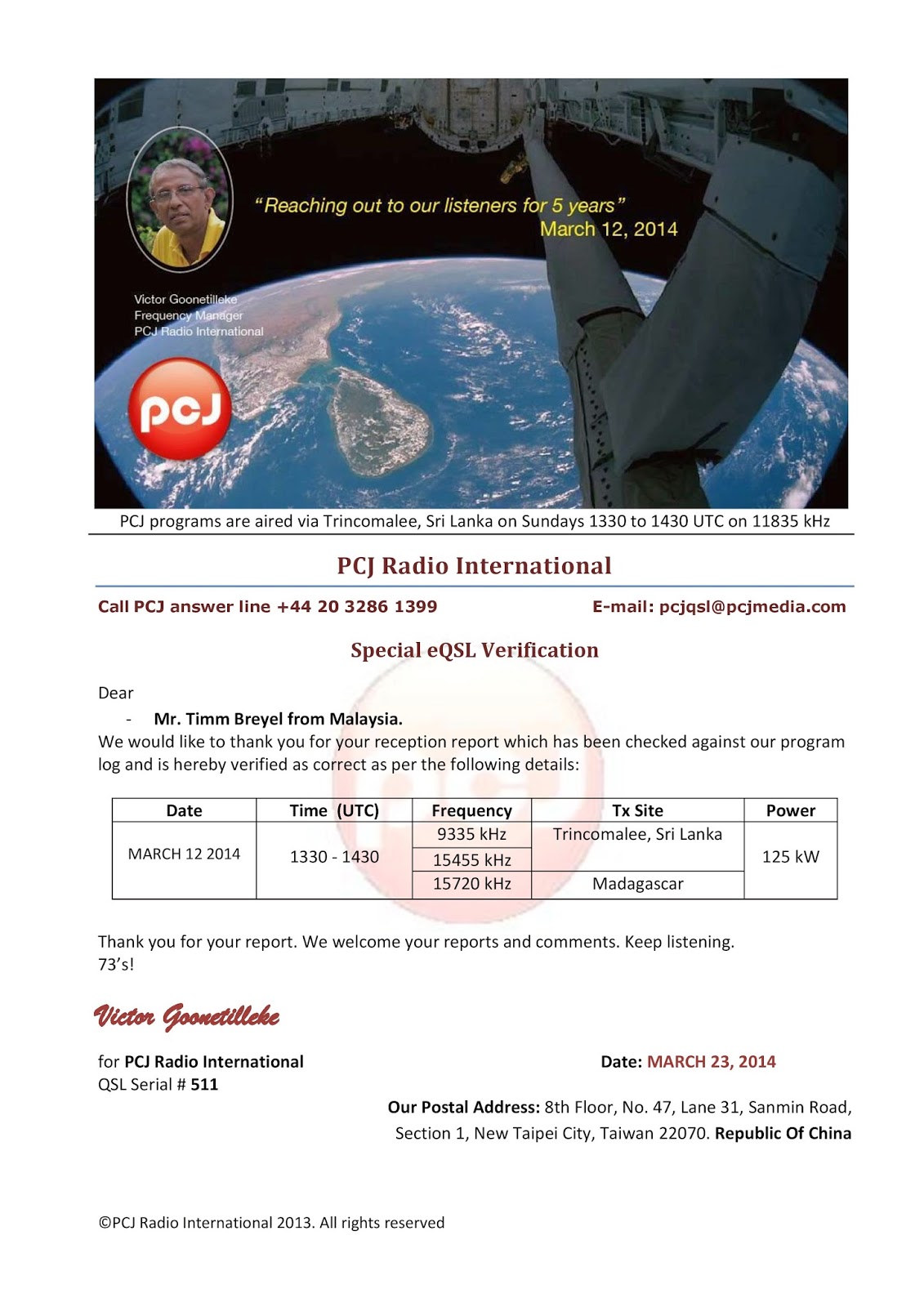 On this auspicious date PCJ Radio International was heard well from transmitter sites in Trincomalee, Sri Lanka and Talata Volondry, Madagascar. PCJ Radio International signed on at 13.30 UTC with their interval tune, followed by the Beatles song "All You Need Is Love" mixed under congratulatory messages from Tom Meijer, Bob Zanetti, Kelly Alexander and others. Episodes from the Stumpf Files and Media Network Plus aired mid way through the broadcast. Tom Meijer and Keith Perron stepped back in time and reminisced. Keith announced a contest for listeners who would  be eligible to win a FREE Spectrum Monitor subscription and one of two C. Crane radios. The broadcast closed an hour later with the song "L-O-V-E" performed by Keith.

A podcast of PCJ Radio International's 5th Anniversary broadcast may be downloaded or heard at this LINK.


Reception reports were emailed to PCJ Radio International shortly after the broadcast ended. Veri Signer and Frequency Manager for PCJ replied promptly with the promise of a QSL. The above eQSL was received on 22 March 2014. Paper QSL Card from MGLOB arrived in the mail on 14 May 2014 after submitting reception report to them in April 2014.