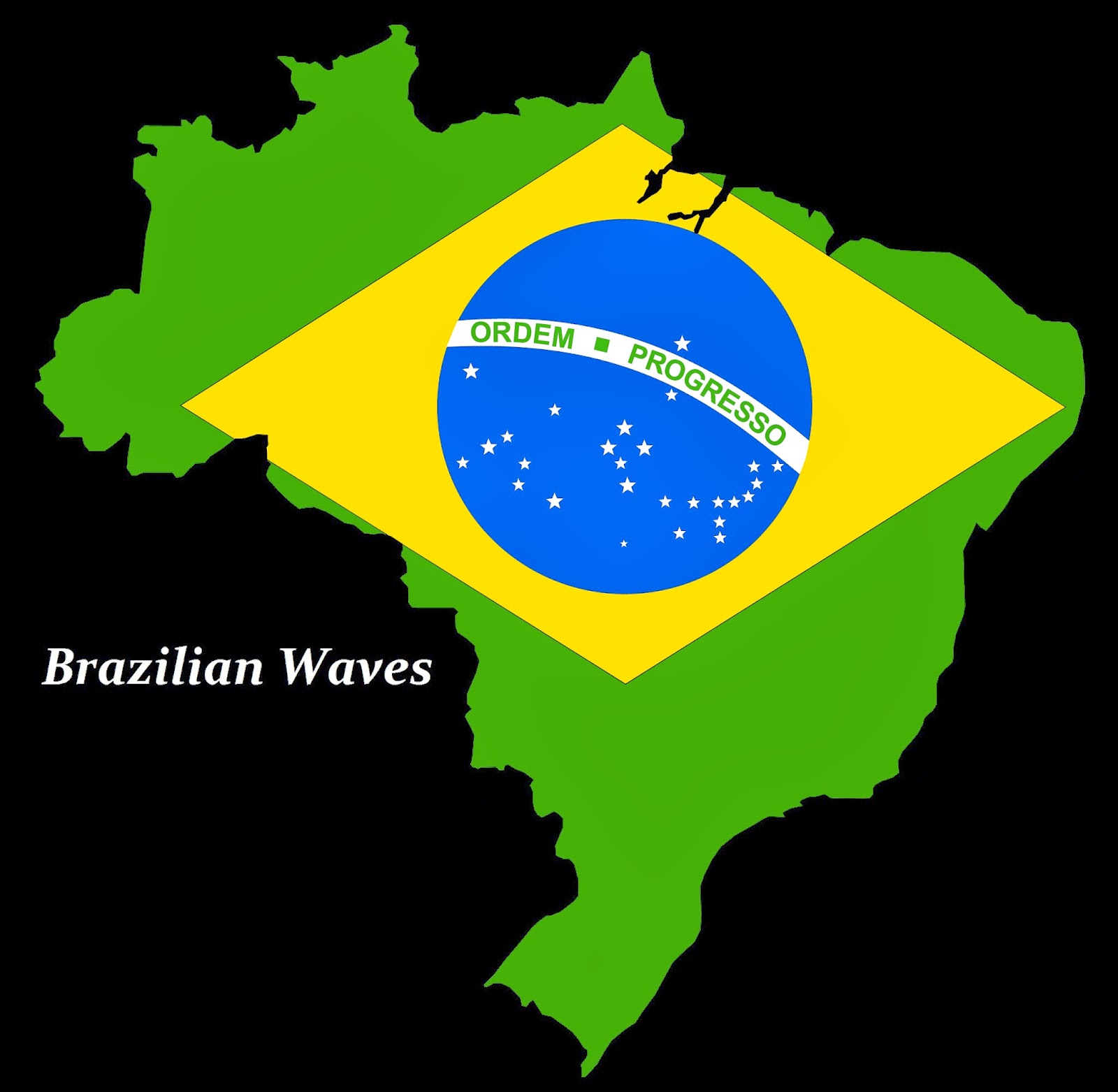 Brazilian waves? No, I'm not referring to soccer legend Pele, nor  Carnival, nor samba, nor bossa nova. I'm talking about Brazilian short-wave radio.  There are literally dozens of stations. And it is with good reason. Brazil is huge - the fifth largest country in the world! Its population of 140,000,000 is probably the most ethnically diverse to be found. In the nordeste, or Northeastern states such as Ceara, Bahia, and Pernambuco, the population is largely negro or mulatto (mixed black and white ancestry). As one moves south, the descendents of African slaves gradually give way to meztizos - people of mixed European and Indian ancestry.

Brazilian short-wave broadcasters occupy a broad spectrum of short-wave frequencies. While most Brazilian short-wave stations use the tropical bands, there are a few dozen stations that can be found from 49 metres, all the way up to 16 meters. Their low-powered transmitters -- generally around 10 kilowatts -- make them hard to hear among the more powerful international broadcast stations, yet given a clear channel they get out quite well.  Radio Bandeirantes, Radio 9 de Julio, Radio Aparecida, Radio Trans Mundial,  Rádio Deus é Amor and Radio Guaruja in Florianopolis (now defunct), among the low-powered stations, have all been received in Malaysia. The exception is Radio Nacional da Amazona / Radio Nacional da Brasilia which competes well with the big boys at 250 kW, night and day.

Such was the case on 15 March 2014 when I logged three of Brazil's more readily received stations on the 31 and 25 metre bands.

• Radio 9 de Julho in Sao Paulo was logged from 20.35 to 20.50 UTC. Brazilian pop music and talk in Portuguese was noted during this transmission.  Reception on 9.820 kHz at 20.35 UTC was (SINPO) 23432 -- weak signal with clear audio despite station splatter and slight fading. At 20.50 UTC strong interference from a Chinese language station covered signal.

• Radio Aparecida in Sao Paulo was monitored from 21.05 to 21.45 UTC. Catholic religious content mixed intermittently between several vocal songs  in Portuguese was was noted on the frequency of 9.630 kHz . Reception at 21.05 UTC was SINPO 24342 -- weak signal with clear audio despite gradual increase in atmospheric noise, which subsequently enveloped signal by 21.45 UTC. 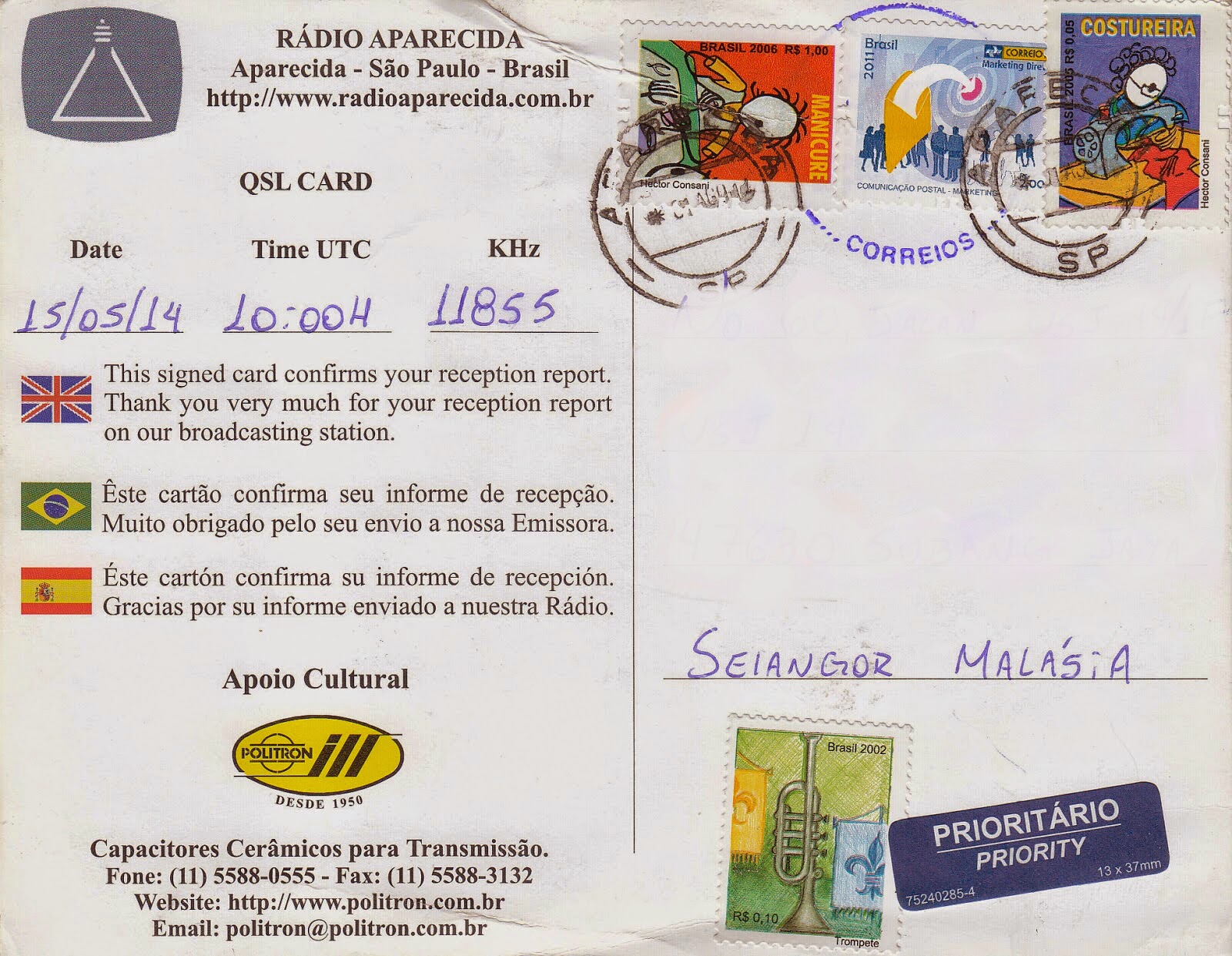 
• Radio Nacional da Brasilia, not to be confused with Radio Nacional da Amazonia, was received between 21.30 and 22.00 UTC. This broadcast contained non-stop Brazilian pop music hosted by a male announcer in Potuguese. Reception on 11.780 kHz throughout much of the transmission was SINPO 25332 -- weak with audible signal despite severe atmospheric noise, which subsequently enveloped signal as daybreak approached the shores of Malaysia.

Reception reports were emailed to all of the above stations on the following day.