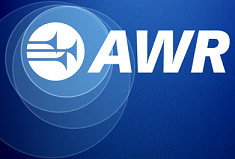 Adventist World Radio was founded in 1971 and is the "radio mission arm" of the Seventh-day Adventist Church. It utilizes AM, FM, Shortwave, satellite, podcasting, and the Internet broadcasting in 77 major languages with a potential coverage of 80% of the world's population. AWR's headquarters is based in Silver Spring, Maryland with studios and transmitters located throughout the world.


MADAGASCAR
Adventist World Radio, transmitting from the Talata Volondry relay site, was logged on 2 March 2014. An interesting mix of Arabic pop music, religious sermons and frequent announcements of the AWR Arabic language website was monitored from 19.05 to 20.05 UTC (broadcast time 19.00 to 21.00 UTC). Reception  on  15.480 kHz (SIO) was 444 -- good signal strength and audio quality, despite slight atmospheric noise throughout transmission.

Reception report was emailed to AWR Frequency & Monitoring Department in Germany on 3 March 2014.

Adventist World Radio - KSDA, transmitting from Agat, was logged on 4 March 2014. A Chinese language broadcast with sermon from a female announcer and occasional selection of music was monitored from 22.40 to 22.59 UTC. Reception was weak to fair signal with atmospheric noise on 15.685 kHz, earning an (SIO) rating of 232.

Another reception report was emailed to AWR Frequency & Monitoring Department on 4 March 2014.

SOUTH AFRICA
Adventist World Radio, transmitting from the SUNTECH facility in Meyerton, South Africa, was logged on 29 March 2014. African choral music and talking (possibly sermon) in Masai was heard from 17.30 to 18.00 UTC. Reception on 11.770 kHz was (SIO) 343 -- fair signal strength with slight fading and atmospheric noise.