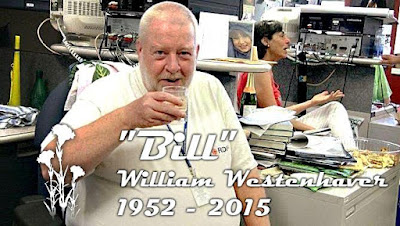 Anyone who ever submitted a reception report to Radio Canada International (RCI) will surely recognise the name. Bill Westenhaver was the QSL veri-signer for RCI. He was the kind and helpful guy who promptly signed and posted the station's QSL cards. I remember him especially in the closing days of RCI. He worked tirelessly to ensure  listeners received RCI souvenirs and Verification Letters in lieu of QSL cards. Bill could easily have ignored them, but he didn't. That's the kind of guy he was...classy!

A native of Angola, Indiana, Bill moved to Montreal in the late 1960s, where he spent the rest of his life. An avid short-wave listener, DXer and QSL collector, Bill was an active member of several radio clubs including CIDX and Speedx. He was a participant in numerous ANARC conventions and Winter SWL Festivals.
Bill was an active member of the Coalition to Restore RCI Funding and the RCI Action Group, the ad hoc groups that worked tirelessly to restore and/or retain the services of Radio Canada International on short-wave.

The following obituary is from the Radio Canada International website.

"We have the sad duty to announce that our colleague, William Westenhaver died on November 17, 2015, at the age of  63. Everyone knew him simply as 'Bill'.

"While living a quiet and discreet life, he was well-liked and appreciated by all his colleagues past and present, and by RCI listeners around the world where he often helped read their letters on various programmes over many years creating a close and important relationship between RCI and its listeners, and himself.

"Bill was also well-known by radio listeners in Montreal where he was the original co-host of the International Radio Report and other programmes on CKUT-FM, McGill University radio.
"Besides his love of radio, Bill also had a passion for polar bears and the walls of his office were festooned with pictures of the white bears. A listener had even sent a little stuffed polar bear which he kept on his desk, hence a nickname we sometimes called him, 'Bill the bear'.
"Bill himself had a touch of the polar bear about him being stout and with white hair and beard, and solitary, but always very sociable. All of us remember his calm, gentleness, and his ready smile.
"To all who knew him in person, or through the radio or mails and who will be saddened to learn of his passing, we send our most sincere condolences".

Indeed, I offer my sincerest condolences to his family. And, thank you, Bill!