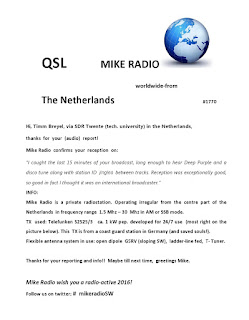 Mike Radio* in The Netherlands was received on 13 December 2015, using the SDR receiver at Twente in The Netherlands. The last 15 minutes of the broadcast, from  09.30  till 9.45 UTC, were monitored and  consisted of station jingles between Rock/Pop songs, including Deep Purple's "Sweet Child in Time".  Reception on 6.180 kHz was (SINPO) 55555. The signal was nearly as strong as any major European station present on the 49 metre band at this time, so much so that I thought perhaps it was a new station.

In any event a reception report was emailed to Mike Radio on the same day, followed by a subsequent email a week later. Mike Radio replied on 21 December 2015, stating "QSL later. Ok?"An eQSL was received on 3 January 2016. Thank you, Mike. 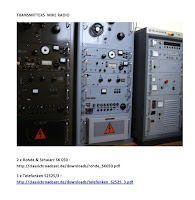 *Logged using a remote SDR receiver linked to the University of Twente (The Netherlands) website and monitored in Malaysia
Posted by T.L. Breyel at 5:14 AM