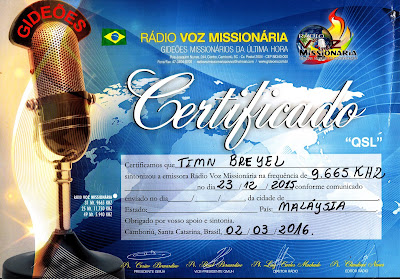 Rádio Voz Missionária, transmitting from Camboriú, SC, Brazil, was logged on 23 December 2015. An evangelical minister speaking in Portuguese was heard briefly from 22.40 till 23.00 UTC. Reception on 9.665 kHz was 23332 -- weak, clear and audible despite co-frequency interference from KCBS Pyongyang. Around 22.50 UTC, Rádio Voz Missionária gradually faded under the North Korean broadcaster and disappeared completely by 23.00 UTC. A station which is usually elusive in this quarter of the world, caught me by surprise and I was exceptionally lucky just to hear their signal, however briefly.

Reception report was emailed to Rádio Voz Missionária on the following day. A week later, a report was posted too. A large QSL card (approximately 9"x12") along with station brochure arrived in the mail on 1 April 2016. 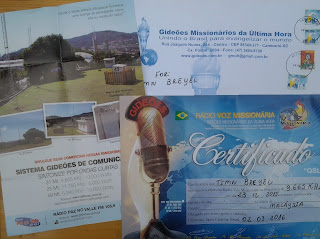