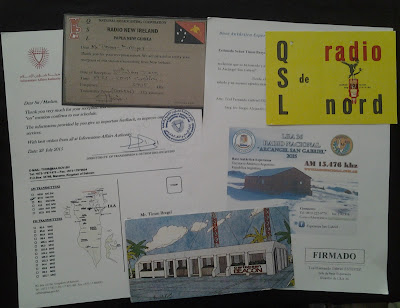 Why are the above QSLs so priceless to me? Well, each has a long and troubled history. Mostly, each took years to verify, either due to poor reception, long delays in correspondence or both. Suffice it to say, these QSLs were not easy to obtain. Only through sheer determination and  resourcefulness and -- in some cases, plain luck -- did I succeed this year in getting their respective QSLs.

LRA36 - Radio Nacional Arcángel San Gabriel, transmitting with 10 kW  from  Base Esperanza, Antártida Argentina, was logged on 14  April 2015.  The previous year I had managed to detect their signal and submit a reception report, but no email or mail was forthcoming. My guess is this was due to the change in personnel at the base when I submitted my report.

On top of that, LRA36 is just simply difficult to hear in South East Asia. Propagation, time of year and day, along with irregular operation makes it an almost unlikely catch. Fortunately, just as the new team arrived at the base and began transmission I caught the station, then quickly emailed my reception report in Spanish. Within a week I received confirmation of them.

NBC Radio New Ireland in Papua New Guinea was another long sought after QSL. For approximately three years this 10 kW station, located in the far eastern islands of the country, had been heard. Numerous emails, letters and, on one occasion, a register letter were sent to both the NBC headquarters in Port Moresby and the provincial station in Kavieng. Initially, NBC headquarters did not rely; only a proxy person, chiefly Roline Likas (a New Ireland Journalist) associated with Radio New Ireland, was used to contact the station, and on a few occasions reception reports were passed on to the Provincial Station Manager. But due to poor internet service, poor facilities and (mostly) poor verbal communications I could never get their QSL.

Finally, when their shortwave transmitter and sister stations around PNG ceased operation in mid-2015, I again contacted the NBC headquarters in Port Moresby. By this time, a new email address and website had been activated. The improved communications allowed me to contact Allen Arifeae (NBC Executive Director) and Michael Samuga (NBC Provincial Radio Network), who relayed my reception report to Alwin Anetul (NBC Radio New Ireland Provincial Station Manager), explaining the urgency and problem in obtaining their QSL. Eventually Alwin Anetul in Kavieng replied with an eQSL and apology for the delay.

Radio Bahrain, a 10 kW station operating out of Abu Hayan, had been heard sporadically over the years, up until a station in China eclipsed their signal and they were never heard from again. Finally, on 11 April 2015, with the Chinese station missing from the same frequency, I managed to catch one of their transmissions. After some searching around the Internet, I found a few email addresses and submitted a reception report, including an audio file of this transmission. Programming was in Arabic with a number of Arabic language songs, one of which I fortunately knew by name; and this may have helped as well in the verification. Four months later, out of the blue, they sent an eQSL.

Radio Nord Revival, operating out of Sala, Sweden with a 10 kW transmitter, was received on 22 August 2014. This happened to be during one of their special broadcasts on the 49 metre band and later in the broadcast on the 31 metre band. The 49 metre broadcast was null in South East Asia, but on 9.295 kHz at 22.10 UTC Radio Nord Revival was observed with a SINPO of 24311 -- poor to weak signal strength, static bursts and long fades between audible, sometimes indecipherable speech. Needless to say, timing and the last minute frequency change made it all possible.

After confirmation by email, promising a QSL card, I posted a letter as well. Then, on 29 December 2014, Ronny Forslund at Radio Nord Revival emailed to say "Your QSL card for the Radio Nord Revival transmissions in August is in the mail. Happy New Year from Sweden!" The promised QSL card did indeed arrive in the mail on 8 January 2015.

Caribbean Beacon (University Network), transmitting from The Valley in Anguilla, was logged on 13 April 2012. This was another one of those dream stations that seemed nearly impossible to catch, yet with persistence, patience and good propagation success followed. For several months, at different hours, Caribbean Beacon was monitored on 11.775 kHz without much success, then under night skies from Anguilla (evening) to Malaysia (dawn) -- a distance of 17,105 km / 10,629 miles -- the sermon of a female minster, presumably Pastor Melissa Scott, was clearly and faintly received.

After sending a reception report shortly after the broadcast, Doris Mussington of Caribbean Beacon emailed on 17 April 2012, confirming my reception report: "Thanks for listening to us on the Caribbean Beacon.  Please continue to listen to us and be blessed. A QSL card will be mailed to you." After many follow-up emails, Doris Mussington at one point said the QSL cards were finished. Three years later, on 23 April 2015, I received the promised QSL card. However, I hasten to add the QSL reached in two weeks, having been posted on 9 April 2015. Strange.

Is there a lesson to be learned from all this? I believe so. Never give up. Keep trying and, most of all, be patient.
Posted by T.L. Breyel at 7:50 AM