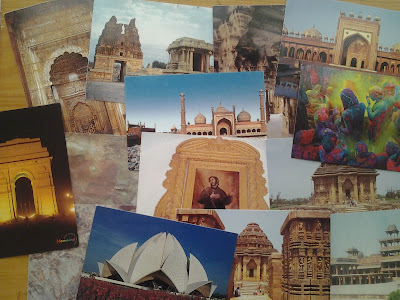 All India Radio (AIR) external and domestic services, both on medium-wave and short-wave, have  radiated well over the years in to South East Asia. The greater problem with AIR has never been so much reception but rather it has been in obtaining verification for many of their domestic stations. So, it was with immense  delight when many QSL cards for their domestic stations arrived in the letterbox this year.

To receive these verification cards I submitted reception reports, usually but not always, with audio files to Spectrum Management. These were sent by both email and post. This successful run of domestic QSLs began in 2013 and hit an all-time high of six this year, including: 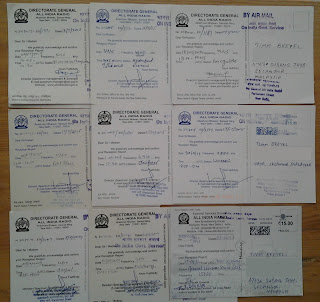 The external service (General Overseas Service) of All India Radio via transmitter sites in Aligarh, Bengaluru, Kingsway, New Delhi,  and  Panaji have been much easier to QSL over the years.

Why bother to QSL so many All India Radio stations? Isn't one QSL sufficient to show confirmation for the country of India? It depends. One, the AIR stations on medium-wave and short-wave are out there for the listening and verification. And two, some AIR stations count as a separate country, at least according to North American Shortwave Association (NASWA). Port Blair (Andaman & Nicobar Islands), Panaji (Goa), Kashmir and Sikkim are considered individual countries, owing to their unique colonial past.

Again, the lesson here is to be patient and enjoy the hobby!!!