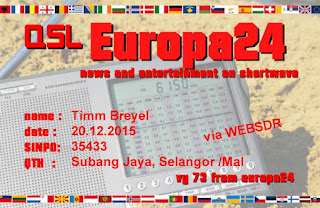 Europa 24* (registered to Interessengemeinschaft Hochfrequenztechnik e.V.), transmitting  Datteln, near Dortmund (Germany), was logged on  20 December 2015. A German language broadcast of news and English Pop/Rock music was monitored from 13.00 to 13.30 UTC. Reception on  6.150 kHz was (SINPO) 35433 -- fair signal strength, clear audio but deep and occasional fading; reception deteriorated severely after 13.15 UTC to 24331 - poor signal strength and severe atmospheric noise. It sounded as if TX power had been reduced and/or switched off temporarily. Signal before 13.00 UTC was much better overall.

Reception report was submitted to previously known email address on 21 December 2015. This eQSL was received on 14 January 2016.

*Logged using a remote SDR receiver linked to the University of Twente (The Netherlands) website and monitored in Malaysia
Posted by T.L. Breyel at 9:08 PM