The Flying Rock Circus* via Channel 292 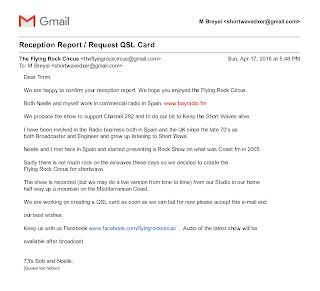 Reception on 6.070 kHz was (SINPO) 55545 -- excellent signal strength, audio quality, with slight and occasional fading, no QRN and no QRM. HERE's how The Flying Rock Circus sounded from The Netherlands.

Reception report was emailed on the same day. An email verification arrived on 17 April 2016. Thank you, Bob and Noelle!

*Transmission was received using SDR web-receiver in The Netherlands (Twente)
Posted by T.L. Breyel at 3:22 AM