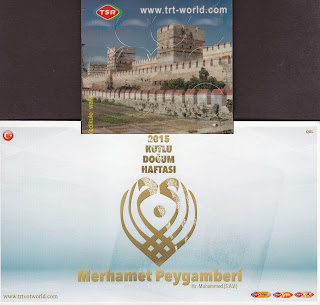 Voice of Turkey, broadcasting from the 500 kW Emirler transmitter site, was heard on 18 April 2015.

An English language broadcast from 16.30 till 17.26 UTC featured: world and regional news; Turkish press review including a report on the Anzac WWI anniversary of the Battle of Golippoli (or the Battle of Çanakkale); a biographical programme focusing on the Prophet Muhammad (saw); an economic programme entitled "Turkey Rising Out of the Crisis"; a programme on "Eco-friendly Tips" highlighting environmental law; a programme called "Today in History"; then a regular Voice of Turkey programme "Question of the Month"; followed by Turkish pop music. 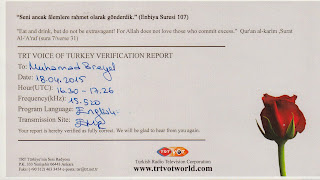 Fortunately reception on the short-wave frequency of 15.520 kHz was nearly flawless with a (SINPO) of 55545 -- excellent on all accounts, except for slight and occasional fading.