A new Somali shortwave station is testing on the frequency of 13.800 kHz. Radio Puntland belongs to the government of Puntland, which is one of the breakaway regions of Somalia in the Horn of Africa.

Puntland media reported on 11 April 2015 that the station was officially opened by Puntland president Abdurrahman Faroole. Radio Puntland is operated by Italian technicians from Goldrock Kenya, and has received financial support from the government of Italy. President Faroole says that also a television station will be coming soon.

Current test broadcasts from the Puntland capital Garowe consist of non-stop Somali music, aired at varying levels of transmitter power, 50 watts or more. "We should begin regular transmission by the end of June," says Enrico Li Perni from Goldrock Kenya. The permanent transmitter is still under construction and will have a power of 20 kilowatts. 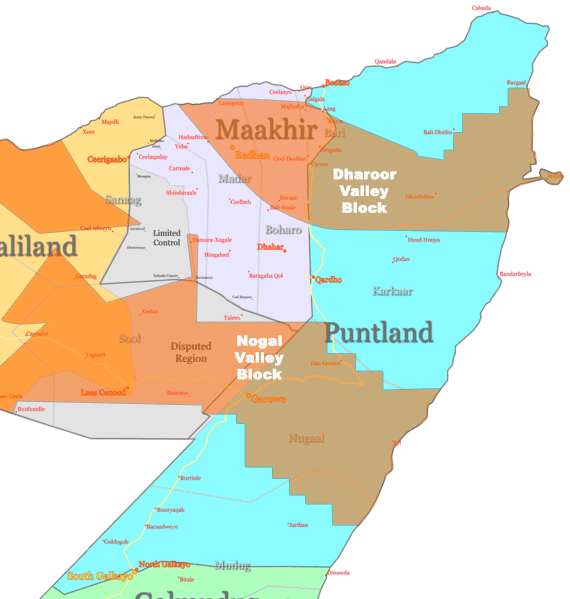 Puntland Radio One "test transmission" was logged in Malaysia on 27 April 2015. Station IDs, frequency, website and email was presented in Italian and English by a male announcer, followed by Somali vernacular presented by a female announcer. Between announcements, Horn of Africa (Somali) music was observed from 16.40 till 17.20 UTC, and later. Reception on 13.800 kHz  was (SINPO) 25342 -- weak signal with occasional static bursts and slight fading. Nevertheless transmission was audible and occasionally clear.

Although reception was poor, HERE is a sample of the music and station ID observed in the Kuala Lumpur area. 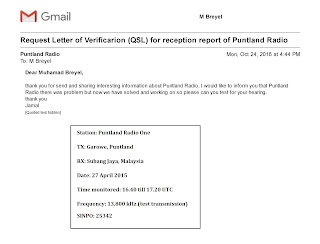 Reception report was emailed and submitted on-line to Puntand Radio & TV. Email was submitted to Goldrock International Kenya as well, owing that their engineering department is directly involved. Letter was posted to Goldrock International Kenya, rather than Puntland Radio & TV, a day later. A follow-up email was submitted on 30 September 2016. The above email acknowledging report from Radio Puntland was received on 24 October 2016.