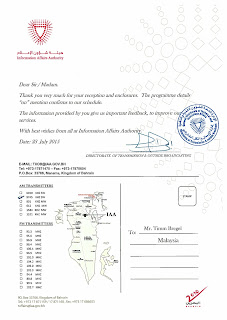 Radio Bahrain relay of Shabab FM (presumed), transmitting Abu Hayan, Kingdom of Bahrain, was logged on 10 April 2015. Several uninterrupted vocal songs performed in Arabic, including "Ya Rahman"(?), was heard from 22.35 till 23.05 UTC. At least four to five songs were observed in nearly half an hour.

Reception om 9.745 kHz  was (SINPO) 24321 -- poor to weak signal, clear audio on occasion despite long fades and transmitter droning. Signal did not improve during transmission monitored after 23.00 UTC.

Despite the less than favourable conditions, Arabic music may be heard in this AUDIO FILE.  No broadcaster except Radio Bahrain operated on the above frequency, at the time of reception.

Reception report was emailed to Radio Bahrain on 11 April 2015. A follow-letter was submitted as well. Previous attempts to QSL Radio Bahrain have failed. On 23 July 2015, much to my amazement, I received this eQSL from veri-signer, Fatima Amin. I am elated! Head over heels, on the moon, with this long-sought after country and QSL. Shukran, Radio Bahrain!!!