Radio Seagull* (via the North Sea) 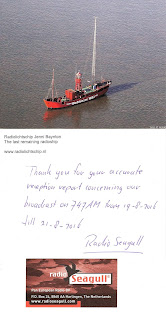 Radio Seagull*, presumably anchored in the North Sea, was heard on 20 August 2016, from 05.10 till 05.45 UTC, on the medium-wave frequency of 747 kHz, using the remote SDR receiver in the Netherlands (Twente). Reception was (SINPO) 34553 -- fair signal strength, clear audio, some atmospheric noise and transmitter hum.

A selection of rock songs, including Starship  "We Built This City" and Deep Purple "Strange Kind of Woman" (live version in Osaka, Japan), were heard between technical problems with computer/studio console.

HERE's how Radio Seagull sounded in The Netherlands.

Report was emailed to Radio Seagull on the same day. An eQSL was received on 22 August 2016.