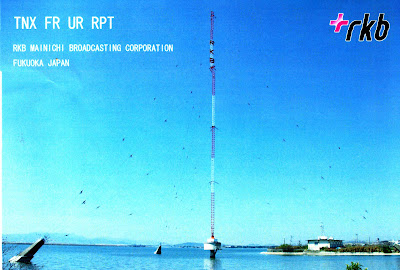 RKB Mainichi Hoso - JOFR, transmitting from Fukuoka (Japan) was logged on 20 August 2016, from 18.40 till 18.50 UTC, on the medium-wave frequency of 1278 kHz. A weak signal with clear speech in Japanese was observed when audible and not fading (every 2 to 3 minutes). No co-frequency interference was present at 18.40 UTC (03.40am, Japan Time), which made for ideal reception conditions. Overall SINPO rated 25432.

On subsequent days JOFR was logged on 21, 22 and 25 August 2016, even as late as 20.15 UTC with approximately the same results. Japanese announcer and music was noted when not fading under. On 25 August 2016, a pop music show, moderated by female and male announcers, speaking Japanese, was observed after 18.40 UTC. 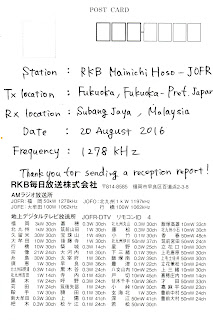 The frequency (1278 kHz) is virtually "clear channel" for JOFR in this quarter of the world, unlike the NHK Radio 2 stations on 747 kHz (JOIB) and 774 kHz (JOUB) which have to compete with either stations in Thailand and/or Indonesia, respectively. Even JOWF - STV Broadcasting Co. Ltd has to compete with broadcasters in Thailand (Samut Sakhon) and China, with the later possibly signing-off around 18.00 UTC. Hopefully the Thai station, which reportedly is off air on Tuesdays, will allow for a window of opportunity to log JOWF.

A brief recording of their transmission received in Malaysia may be heard HERE. To see a YouTube video of JOFR's coastal transmitter site in Fukuoka, click HERE.