Radio Taiwan International in a Special German language broadcast from Tamsui (Taiwan) was logged on 26 and 28 August 2016. This was a three-day run -- 26, 27 and 28 August -- direct from Tamsui. RTI features this special transmission annually. primarily for their German speaking listeners in Europe. 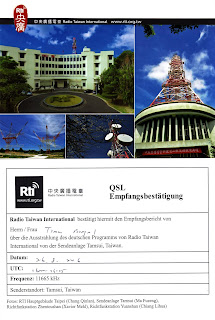 26 August 2016:
Reception on 11.665 kHz was  (SINPO) was 24432 -- weak signal with dominant carrier and only peaks of faint audio under atmospheric noise. By 16.25 UTC, signal was inaudible and immersed in atmospheric noise. RTI obviously had their antenna aligned towards Europe. 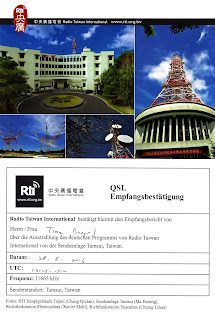 Two days later, reception on 11.665 kHz improved with (SINPO) rating of 45434 -- good signal strength, excellent clarity when not fading under atmospheric noise. HERE's an excerpt from this transmission.

Separate reception reports were emailed and submitted online shortly after each broadcast ended on 26 and 28 August 2016. QSL crads arrived in the mail on 21 December 2016, only after follow-up email reports.