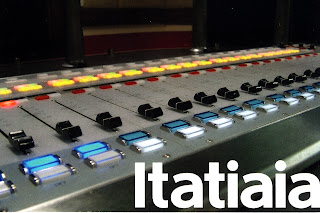 Radio Itatiaia, transmitting from Belo Horizonte MG, Brazil, was logged on 16 June 2014. A Portuguese language broadcast of news/sports/current events (?) presented by a male announcer, followed by a female announcer presenting a promotional advert, was observed from 22.10 to 22.30 UTC. Reception  at 22.10 UTC on 5.970 kHz was (SINPO) 23431 -- weak but audible speech, despite station splatter from RTM Klasik Nasional (Malaysia)/Voice of Vietnam and occasional fading. By 22.30 UTC, QRM enveloped transmission and signal was inaudible at this point.

HERE is an audio file from this transmission at around 22.12 UTC. A male announcer, speaking Portuguese was heard between the fading and station splatter of RTM Klasik Nasional (Malaysia). 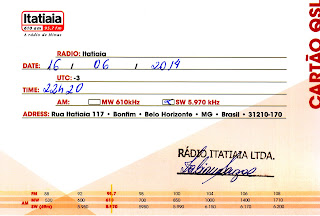 Reception report was emailed the following day and posted at a later date.