Of Faraway Places, Travel Photos and a Steamer Trunk 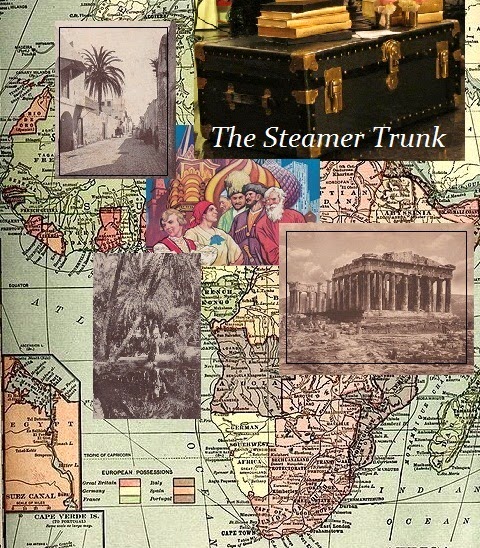 Now for something completely different, totally unrelated to radio -- old photos from a distant time in faraway lands. Well, maybe not so distant and not so faraway, depending on how old one is and where one lives in the world. In either case, short-wave listeners should have a passing interest. I always had a fascination for foreign lands and short-wave radio put me in tune with many a country. Still does, even in this age of Internet and satellite communication. This brings me back to the photos.


In 1969 my maternal grandparents inherited a steamer trunk once owned by a Fredrick Dustmann, a one time lawyer from the US state of Oklahoma who practiced law in the first half of the 20th century. The trunk had originally been willed to my great-grandmother who had befriended him some years before his death.
Mr. Fred, as we knew him, was the son of Prussian immigrants. He was a tall, rotund man. To illustrate his  girth, he had two large dress belt spliced together to form one. The extent of his friendship to my great-grandmother, I have no idea. I am almost certain it was platonic. Even if their relationship was anything more than this, it was entirely their own affair. She was widowed at a relatively young age. Both were consenting adults and elderly by this point. What I do know is Mr. Fred suggested she become his common-law wife in order to inherit his estate. She scotched the idea. Nevertheless, the steamer trunk ended up in her possession, then my grandparents and finally my parents.

Aside from being a dark green trunk with large brass latches and snap lock, it was no different than any steamer trunk used by shipbound travelers of the time. Unlike the kind seen in old movies, it had no stickers of international cities -- Rome, Cairo, Paris, London -- plastered on it. The content within the trunk was more revealing. It was like a crackerjack box full of surprises. Mr. Fred not only was a lawyer, but a world traveler with a variety of interests.

Inside the trunk were photos, postcards, lithographs, books and maps of his travels. Photographic prints of historic sites in Greece, Turkey, Algeria, USSR (Russia, Uzbekistan), England and Washington DC lay among travel books on Germany and elsewhere, all of these pre-WWII. Old maps of Africa and the Middle East, with colonial names of now non-existent borders, were penciled in with routes he traveled. More books on hypnosis and séance readings -- common interests in the 1920s -- lay next to the Biblical Book of Danial.

On one of my return visits to the US, I rummaged through the trunk one last time and extracted the photographic prints, some of which I've uploaded here. He apparently had been sufficiently impressed with many of these photos, as he had penciled in captions behind most of the photos.