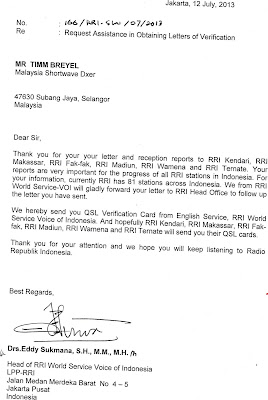 RRI Ternate, transmitting from Ternate, North Maluku Island, Republic of Indonesia, was logged on 14 May 2013, after receiving a tip from R. Howard in California. Several qari and qariah recited ayat from the Quran during a Quran Contest between 12.10 to 14.10 UTC. Reception on 3.345 kHz at 12.10 UTC was (SINPO)  24321 -- weak but audible with fading and some QRN. At 12.45 UTC signal improved slightly with peaks of fair audio between fading, Reception remained the same up until 13.50 UTC, at which point signal deteriorated to 14221 -- barely audible and garbled. Additionally, no signal was detected before 12.00 UTC in this quarter. Signal was audible until 15.00 UTC when the station signed-off with music. Sign-on at 20.00 UTC produced only a carrier with faint modulation when signal peaked. No signal was detected after 20.30 UTC.

To provide an idea of the reception of RRI Ternate in central West Malaysia, you may listen to these sound files HERE (qariah reciting Quran) and HERE (music and DJ). 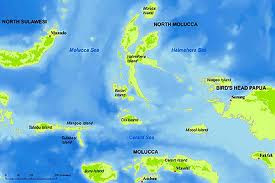 A reception report was submitted the following day to RRI Ternate by email, post and Facebook. Hopefully someone at RRI Ternate will QSL. On 21 May 2013, I received this Facebook message from RRI Ternate in response to my reception report: Terima Kasih. Kami akan beritahukan secepatnya (Thank You. We will notify as soon as possible).


POSTSCRIPT
RRI Ternate was inactive on 17, 18 and 19 May 2013. Transmission from RRI Ternate appears to be sporadic.

I received the above Letter of Verification from RRI-VoI in an email on 16 July 2013.