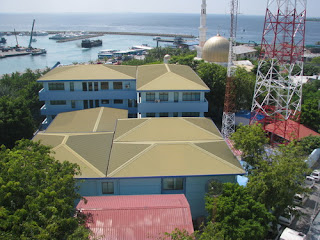 Voice of Maldives (Dhivehi Raajjeyage Adu) -- Maldives National Broadcasting Corporation, transmitting from Male, Republic of Maldives, was logged on 10 October 2012. Broadcasting in the Divehi (Maldivian) language, Islamic programming and music was monitored from 16.45 to 17.30 UTC on the medium-wave frequency of 1449 kHz. Reception (SINPO) was 34332 -- fair signal strength when it peaked, then faded every 7 minutes. Despite these conditions,  signal was audible and clear throughout much of the broadcast.

To give you an idea of the reception of Voice of Maldives (from Male) in Malaysia, you may listen to the following audio file HERE. It was recorded on 10 October 2012 at approximately 16.57 UTC.

Reception report was emailed the following day. On 17 October 2012, I received this message from Maldives Broadcasting Corporation, after contacting them on FaceBook: "Thank you for the information. Will check and reply to you shortly with confirmation."

POSTSCRIPT (16 May 2016)
Azad from Maldives informs me that this is not the Voice of Maldives. Thank you very much, Azad! At least this answers why there was neither a follow-up from the station nor a QSL. The big question remains: Based on the audio file above, who is the broadcaster? I now suspect Iran, in particular, IRIB Bandar-e-Torkeman [Bandar Torkaman] in Golestan Province. The station operated during this time period and at 400 kW which is certainly a powerful enough signal to reach Malaysia.