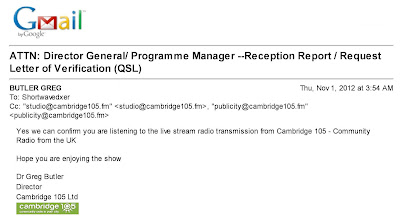 Cambridge 105 FM in Cambridgeshire, UK was logged on 31 October 2012, using their Internet stream. A programme of pop music, community announcements and station promotions, including a live Halloween feed called "Man on the Moon", was monitored from 18.30 to 19.30 UTC. The stream was received at: 32 kps in aac format over an application called TuneIn Radio, which was installed on both an Apple iPod Touch and Blackberry Bold 9700.

A reception report was emailed to Cambridge 105 FM,  "Community Radio In Your City". In less than an hour I received two emails. One from the Station Director, who confirmed that I had listened to their Internet stream. Another message, I assume from  the station's engineer,  who apologised that the station's actual QSL card could only be issued for their "radio" transmission.