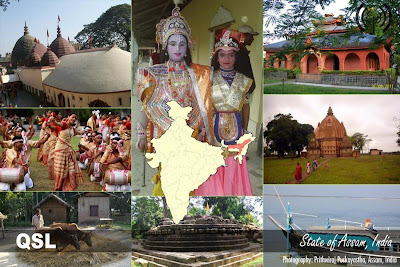 Adventist World Radio - Wavescan, transmitting from Wertachtal, Germany, was logged on 30 September 2012. A programme about the first wireless communication in Australia was highlighted, followed by a feature on TV/Radio broadcasters who offer Portuguese language programmes, then lastly the 5th Edition of Indian DX Report. Transmission was from 12.00 to 12.30 UTC on 17.535 kHz. Reception (SINPO) was 35333 -- fair signal strength with moderate atmospheric noise and ripple fading. Despite these conditions, speech was audible and clear. Quality of the transmission was degraded to 25332 after 20.20 UTC. 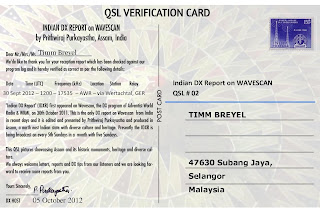 A reception report was submitted to Indian DX Report shortly after the broadcast. The following day I received verification that an eQSL would be sent to me. Indeed, this eQSL was received on 5 October 2012. Thank you very much, Prithwiraj.