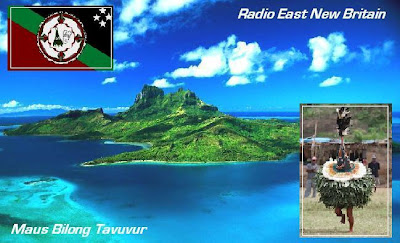 Recordings of the reception quality can be sample HERE and HERE. Listen closely. Music and station ID can be detected.


A reception report was emailed and posted a few days later. Finally -- after many follow-up emails -- on 21 January 2013, I received  confirmation from  NBC Radio East New Britain in Rabaul, PNG.  The Provincial Director at Radio East New Britain, Mr. Terry Longbut, emailed and confirmed the above self-prepared eQSL (which was tightly cropped). He filled in the details, signed and stamped with the station's common NBC seal. Included with the attached eQSL was the following message from him: "Hello,  Mr. Breyel. So sorry for the long delay in responding to your email mainly due to technical problem. This is to verify and confirm your reception report request via the qsl card attached. Cheers, Terry." I replied thanking him and requested a Letter of Verification on NBC stationery (which may be pushing my luck). He responded promptly: "Noted". Thank you very, very much, Terry.