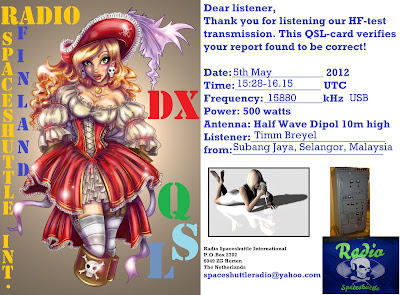 Radio Spaceshuttle International, a pirate station in Finland, was logged on 5 May 2012. An English language broadcast of Rock music, frequent station IDs and announcements was monitored from 15.28 to 16.15 UTC (sign-off was at 16.45 UTC).  This 500 kW station was received on 15.880 kHz in USB mode; in AM mode it was faintly detected. Reception (SINPO) was 25332 -- fair signal strength, no interference, occasional fading and slight heterodyning, otherwise reception was reasonably audible and clear at times during their transmission.
Reception report was emailed. The following day (6 May 2012), DJ "Dick Spacewalker" replied thanking me and stating:

"I shall send you a QSL- it will take some time because we have a lot of reports in hand now. We shall send it both ways e-mail and via snail-mail.

Transmitter and studio of Radio Spaceshuttle is situated in Finland. Transmitting power used was 500 watts; antenna used is a halfwave dipole on 10 meters high.

Very pleased to see we can cover nearly whole world, east to west from New Zealand to west coast of USA. And specially liked to get report from Malaysia -- I think not many free radio has :)  Very long distance...

Thanks again. We shall write these QSLs when having time for them. But do not worry, it will come.
The above eQSL card arrived on 10 July 2012. According to Dick, a paper QSL card will be posted later.