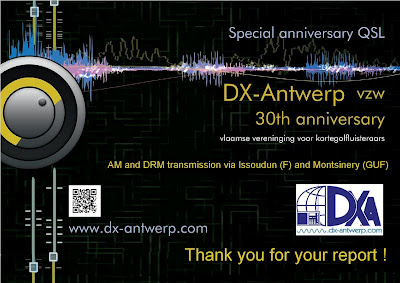 DX Antwerp, a Belgian Radio Club sponsored by TDP, aired a Special 30th Anniversary  broadcast on 12 May 2012. The first broadcast was to  South Asia from the transmitter site in Issoudun, France. It was heard here, in South East Asia, from 04.27 to  05.30 UTC on 17.880 kHz. Reception (SINPO) throughout this one hour broadcast was 43444 -- fair signal strength, despite occasional station splatter from an adjacent broadcaster and minor fading. The programming featured pop music of the 60s and 70s, along with details of scheduled broadcasts to various continents, congratulations from international broadcasters and radio listeners.
A reception report was email shortly after the broadcast. Later in the evening an email and eQSL arrived. The email from Guido Schotmans at DX-Antwerp stated the hard copy of a QSL card would be posted. A postcard size QSL arrived in the mail on 19 June 2012. In the upper right hand corner, the number "3" indicates the series of cards isued. According to Guido Schotmans of DX-Antwerp there were 168 QSLs issued. 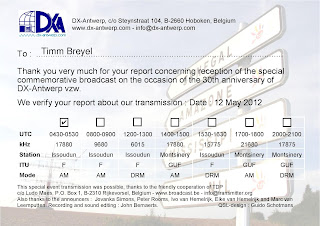