Atlantic 2000 International was logged on 19 May 2012. A French language broadcast of pop music was heard from 19.30 to 20.35 UTC. Mode of transmission was by Internet and short-wave on 6.966 kHz.  Atlantic 2000 was monitored on a 24 kps stream via Shoutcast, which originates from France. Reception was clear with good sound quality and unbroken stream. However, on short-wave a carrier signal was  best heard on 6.965 kHz LSB/SSB, rather than 6.966 kHz. Reception (SINPO) was 15331 --  very faint audio feed at the beginning of transmission which faded occasionally, otherwise reception was poor and incoherent during much of the broadcast time. Location of transmitter is purportedly in Germany. 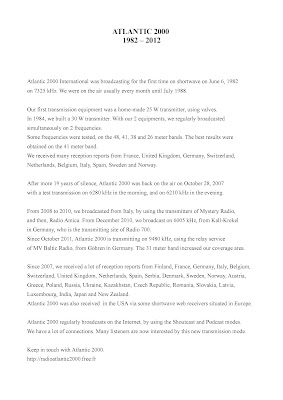 Reception report was promptly submitted. An eQSL for Internet stream and information sheet was emailed on 20 May 2012.