As the owner of a Sangean ATS-909W, which was purchased in late 2010 with the wide (W) FM band (76 to 108 mHz), I suspect they are pretty much the same. Both dual conversion PLL models share the same frequency range, the same clock/dual time, the same Narrow/Wide filters, the same audio switches,  the same output jacks, the same USB/LSB in 40 Hz, the same EEPROM Memory Backup, the same 5-way tuning capability, the same 8-digit alphanumeric tagging of stations, and the same RDS readings for the FM band.
Aside from the attractive and updated design, the Sangean ATS-909X features 406 memories as opposed to 307 on the ATS-909W. Power can now accommodate rechargeable NiCD batteries, which is a major improvement compared to the Sangean ATS-909W. Audio is boosted from 3 mW to 1.5 W when AC power is applied, much like my old Grundig Yacht Boy 500. An individual headphone amplifier is now featured. It has a  longer whip antenna, I suppose to address the poor reception the ATS-909W reportedly had off its whip. Weight and physical dimensions are  more or less the same. 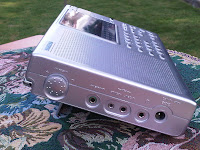 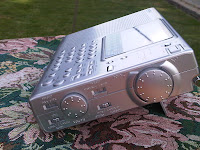 Two negative issues often highlighted about the Sangean ATS-909W is the high battery consumption and deafness off the whip antenna. This definitely is the case with my radio. I generally use rechargeable batteries or AC power. The whip antenna is never used. Instead I have it hooked to an external 1/4 wave antenna, which is linked to about 15 meters of 50 ohm coaxial cable and fed through an MFJ-956 antenna tuner. The Sangean ATS-909X obviously addresses these issues with rechargeable batteries and a longer whip. And from the reviews I've read, a few owners of both radios have noticed an improvement.
Overall, I am very much impressed with the Sangean ATS-909W. I use it regularly in my short-wave DXing and find it has been more than adequate when the other radios just couldn't handle the task at hand. It's not a top-end receiver, but for its price it is a powerful portable radio.