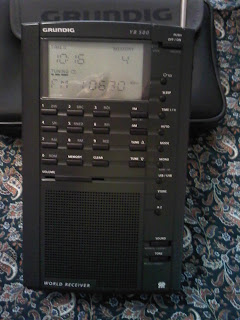 First introduced in 1993, the Grundig Yacht Boy 500 was one of the last German-engineered Yacht Boys and continued its run up to 2000. It was also the last Yacht Boy to be assembled in Portugal, whereas the Yacht Boy 400 was manufactured in China.
While not as sensitive as my Grundig Satellit 500, Grundig Satellit 750/Tecsun S-2000 and Sangean ATS-909W, it is not a shabby performer either. To give some idea of its ability on the short-wave bands, it has received in the past few weeks: Xizang Public Broadcasting Station in Tibet, Voice of Vietnam, Radio Malaysia (Sarawak), Voice of Indonesia, RRI Palangkaraya (Kalimantan, Indonesia), Voice of Korea, Korean Broadcasting System, Radio Taiwan International, Radio Myanmar, Radio Pakistan, Voice of Islamic Republic of Iran, Voice of Turkey, Voice of Greece, RTV Morocco,  Radio Cairo, Radio Tunis Chaine Internationale, Radio Riyadh (Saudi Arabia), Radio Portugal International, Radio Nacional da Amazonia in Brazil, KNLS in Alaska, Radio New Zealand International, WWVH in Hawaii and Radio Canada International. The heavyweights, of course, have been heard too, including Deutsche Welle, Radio France Internationale, Radio Exterior de Espana, China Radio International, Voice of America, Voice of Russia, All India Radio, British Broadcasting Corporation and Radio Australia International.
In fact, the radio features ROM storage for 95 frequencies used by Deutsche Welle (DW), British Broadcasting Corporation (BBC), Radio Nederland International (RNI), Radio Exterior de Espana (REE), Radio France Internationale (RFI), Radio Moscow (RM), Swiss Radio International (SRI), Radiotelevisione Italiana, (RAI), the latter three stations which are now defunct. Nevertheless DW, RFI, BBC, RNI and REE still utilise some of the stored frequencies. On a side note, only the European model of the Grundig Satellit 500 and Grundig Satellit 700 shared this feature.


Another unique feature is the Radio Data System (RDS) for the FM band, which at the time of the radio's development was rather novel for radios in the early 1990s. Fortunately in my region of the world RDS is quite common, so it is an advantage for instantly identifying stations.


The sound quality for a radio this compact is absolutely amazing, given the size of its loudspeaker. It is a mere 3 inches / 77mm in diameter, yet the magnet is about 2.25 inches / 57mm. This would explain why the power boost switch can be tripped to produce from one to two watts of output (when using AC power), and I might add, with no distortion in audio quality.


Station selection can be keyed in directly, recalled from memory or tuned in 1/5kHz increments. Most low cost Chinese made radios cannot tune in 1 kHz steps. The radio has a 3.5 kHz bandwidth filter which is not really all that noticeable in voiding adjacent stations. Perhaps in Europe, where the radio was actually marketed, it is more effective.


While the Grundig Yacht Boy 500 was essentially relegated for the European market, it was sold in the US exclusively  through a mail-order house called Willabee & Ward.  My Yacht Boy 500, which I  purchased on eBay for less than US$85 (US$299 new), was most probably obtained through this vender, considering  the original owner resided in Maryland. Fortunately for a second-hand radio its age, mine was cosmetically clean, perfectly functional and well cared for.


The radio has no output jack for an external antenna, not that it is really necessary.  An after market,  random wire aerial can be easily rolled out and clipped to the whip antenna. This aids reception significantly, although I have noticed a slight overload in frequencies on the 16 meter band.


Probably the most striking thing about the Grundig Yacht Boy 500 is its styling. NPK, a Dutch company, designed it and won  four awards, including the Industrie Forum Design Hannover 1994, Special Design award Chicago, International Design Yearbook 1994 and the Design Zentrum Nordrhein Westfalen. This alone makes it a fine addition to anyone's radio collection.

All in all, I am very pleased with the Grundig Yacht Boy 500. It may not be the most sensitive receiver, but it is more than adequate as a travel radio abroad.


For detailed information on the Grundig Yacht Boy 500, check out this website here.
Posted by T.L. Breyel at 7:07 AM