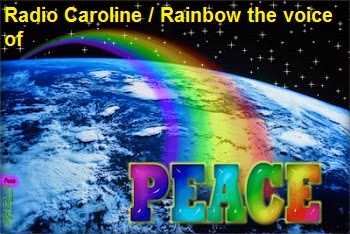 Radio Caroline/Rainbow International*, transmitting from western Poland, was logged on 11 February 2015. A lengthy commentary on the conflict in Ukraine and urging peace in the region was heard, between songs by Pussy Riot, Michael Jackson and The Rolling Stones, from 18.00 till 18.40 UTC.

Since 10 February 2015, Radio Caroline/Rainbow International has been highlighting Russian aggression in the Ukraine and advising  concerned parties to seek a peaceful solution. For this purpose, a new 150-watt transmitter has been deployed near Poznan, Poland. Transmissions are scheduled to last for a few days on the 48 meter band, according to information posted the Radio Caroline blogsite.

Reception report was emailed to Radio Rainbow on the following day. Radio Caroline/Rainbow replied with their confirmation on 13 February 2015 with an eQSL and the following message: "Many thanks for your nice reception report!!! It had been a special transmission for peace in the Ukraine and against Russian aggression there.Best wishes, Radio Caroline/Rainbow International." Thank you, Vragg!