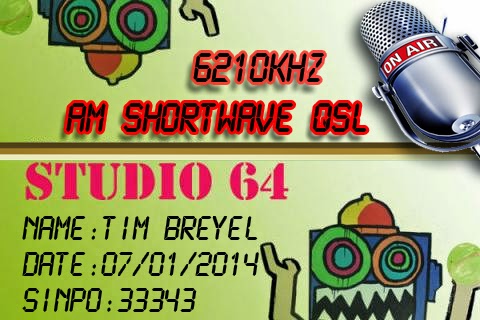 Studio 64*, broadcasting somewhere in the EU,  was heard on 7 January 2015. English language pop songs, including the Village People - "YMCA", Queen - "We Will Rock You", Queen - "Spread Your Wings", was observed from 16.15 to 16.45. Near uninterrupted music continued for some time afterwards. Reception on 6.210 kHz was (SINPO) 33343 - fair signal with atmospheric noise and utility QRM.

Reception report was emailed on 7 January 2015. The above eQSL, along with a message from the TX operator, was received on 13 January 2015.