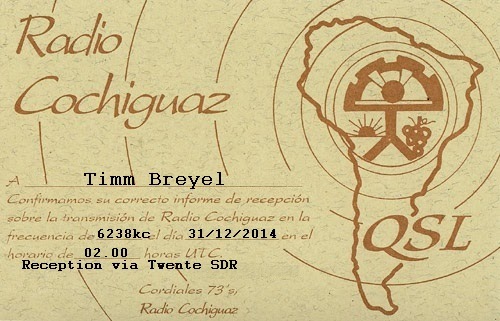 Radio Cochiguaz* via Radio Piranas, a free radio station based in Latin America (Chile?), was logged in the Netherlands on 31 December 2014. A Spanish language broadcast with DJ chit-chat between several songs was observed from 02.00 to 02.50 UTC.

Reception on 6.238 kHz was poor, but with audible speech/music in LSB mode and whenever signal peaked during long fades. Overall SINPO was  14211. Reception throughout the transmission was poor and in fact seemed to worsen after 02.40 UTC. Signal disappeared altogether around 02.50 UTC. Conditions for this 100 watt station were reportedly much better in central Europe, as opposed to reception in the Netherlands and northern Germany.

Nevertheless, a reception report was initially submitted in  English and emailed to Radio Cochiguaz on the same day. A subsequent report written in Spanish was emailed on 2 January 2015, although to be frank I am doubtful any of these efforts will garner a QSL, let alone a reply.

BIG SURPRISE, here. On 18 January 2015, Radio Cochiguaz sent the above eQSL and message confirming reception from Twente: "Thank you very much for your reception report. It's the first time we receive a report from your country. It's nice you could hear us via the Twente SDR receiver in the Netherlands. We were transmitting with power of 100 watts carrier via Radio Pirañas Int. European transmitter site. We have, since we started back in 1997, had close relation to RPI even if he has been broadcasting from another South Amercian country other than ours. In the past we have had several transmitters. It was Cachito Mamani that founded the station and managed it for years together with some of us involved today. As you might know Cachito died for a little more than 4 years ago. We wanted to get the station back on the air and here we are. Thank you for the report. Enclosed is an e-qsl card. You can also take a look at our website: www.radio-cochiguaz.com Saludos de Quri Chakana"

* Logged using remote SDR receiver at the University of Twente (The Netherlands)
Posted by T.L. Breyel at 7:37 AM