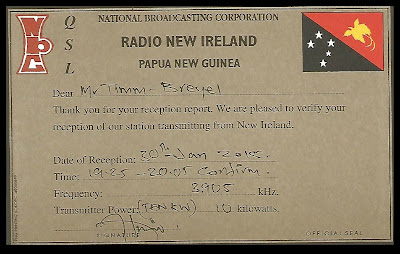 Reception on 3.905 kHz was (SINPO) 34432 -- weak to fair signal with occasional peaks of audio clarity, some co-station interference and crashing static bursts. Transmission was null by 22.00 UTC when checked again. Radio New Ireland's signal appears to be reaching Europe, western North America and Southeast Asia shortly after sign-on at 19.00 UTC (05.00 UTC local time). The station is occasionally heard in Southeast Asia in the evenings around 11.00 UTC until sign-off, but with reduced strength and clarity.

HERE is an audio file of this transmission recorded at 19.26 till 19.30 UTC. It includes some reggae music, DJ chatting in Tok Pisin and station ID (shell horn) near the end of the clip. 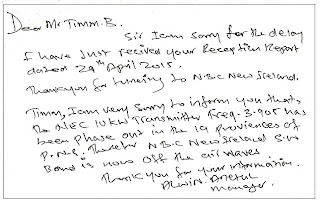 Radio New Ireland has been heard regularly with fair strength for the past three years, here in Southeast Asia, but the station's email address/server remains unreliable and mail service is equally inadequate, which makes obtaining a QSL very difficult. One can contact their FaceBook page, but again the contact person (Roline Likas) will only relay one's message to the Station Manager who has failed to respond to previous emails, letters and registered letters. Nevertheless, a reception report was once again emailed and submitted to their Facebook page on 31 January 2014. There is also a new webpage for NBC, and hopefully with this updated site the reception report submitted on-line will yield positive results.

Finally! After many years of attempting to verify Radio New Ireland I received an eQSL on 29 July 2015. At the same time I was informed the station's shortwave service was recently phased out. So, it is doubly nice to receive this long awaited QSL. Thank you very much,  Allen Arifeae (NBC Executive Director), Michael Samuga (NBC Provincial Radio Network), Alwin Anetul (NBC Radio New Ireland Provincial Station Manager) and Roline Likas (New Ireland Journalist)!


QSLs and log record  of Papua New Guinea stations may be viewed HERE.