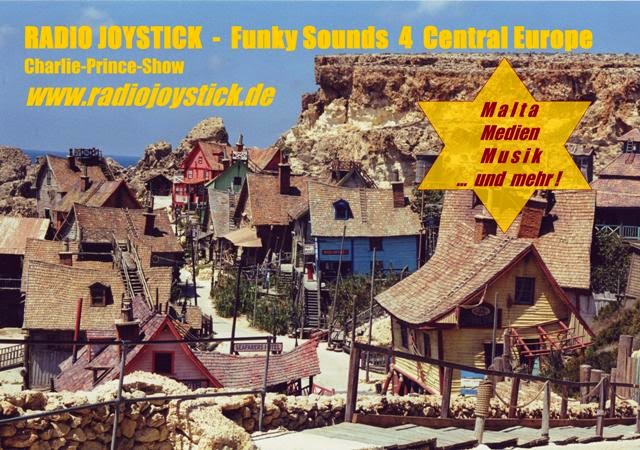 Radio Joystick*, transmitting via Media Broadcast GmdH in Moosbrunn, Austria, was logged on 5 October 2014. Radio Joystick incidentally broadcasts every first Sunday of the month from 10.00 to 11.00 UTC. On this particular day, the Charlie Prince Show was observed from 10.00 to 10.45 UTC.

The transmission began with station ID and postal address, followed by station jingle, "Radio Joystick...Funky Sounds 4 Central Europe (in English and German)...Charlie Prince". Music followed with "Pump Up the Volume", then DJ Charlie Prince spoke in German and introduced the re-mix song, "Changes". DJ announced next "fantastische" song by the Bongo Band, mentioned a letter from a listener in Stuttgart and reception report for QSL card. Funky piano dance tune followed. DJ Charlie Prince announced postal address and email address in German and English, then played "Do You Dream". DJ Charlie Prince announced next song by Charlie Cooper - "Jagemeister (look out for the bar)". Station ID/jingle for Radio Joystick, then DJ Charlie Prince spoke about some recent events in Europe and bus service in Spain which was mixed over a synth dance song. DJ Charlie Prince introduced the next track, an "Oldie" entitled "Run Away". DJ Charlie Prince mentioned a T-shirt design of a young woman in a bikini and the message "Dance like Christina Br..." while playing another dance track. Music continued with more comments from DJ.

Reception on 7.330 kHz was (SINPO) 55555 - excellent signal and clear audio with no fading nor interference.

Reception report was emailed to Radio Joystick later in the evening. Charlie Prince replied promptly on 6 October 2014 with an ePhoto of the QSL, but stopped short of an actual verification. He wrote the following message, including one in Bahasa Malaysia:
"Thanks for listening and writing – I hope you enjoyed the px. Unfortunately we do not verify reception via remote receiver, because of missing own efforts. Please understand this – but tune in again!
"Terima kasih kerana mendengar dan bertulis - Saya berharap anda menikmati px itu.Malangnya kami tidak mengesahkan penerimaan melalui penerima jauh, kerana hilang usaha sendiri. Sila faham ini - tetapi menonton sekali lagi!"

While I understand the policy it should be understood Radio Joystick is impossible to receive at this time and frequency. Firstly, there is too much station splatter on 7.335 kHz from CNR2 at this time; secondly, signal will not radiate to Asia at this time unless grey-line is present (which is unlikely even in the winter months). Obviously, the transmission is meant strictly for Europeans.

*Logged using remote SDR receiver at University of Twente, the Netherlands.
Posted by T.L. Breyel at 10:19 AM