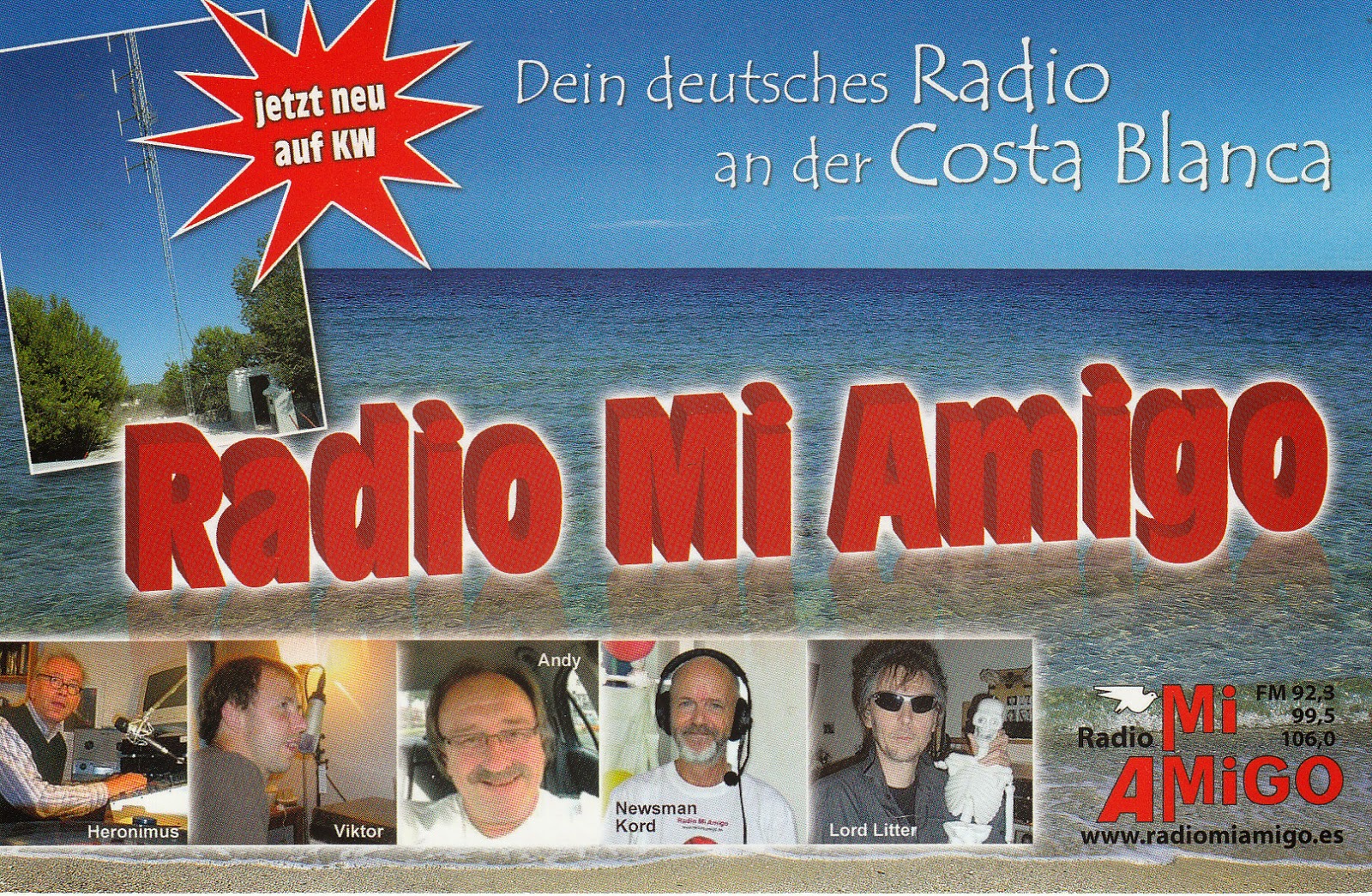 Radio Mi Amigo International*, in a "Test Transmission" from Radio 700 in Kall-Krekel. Germany, was logged on 14 September 2014. The first part of a four-hour test transmission  from 08.40 to 09.15 UTC included frequent station IDs, requests for reception reports and oldies music. The first hour featured an English broadcast, followed by two hours in German and the final hour in Dutch. Reception on 6.005  kHz was (SINPO) 45544 -- good signal with minor fading, otherwise good reception from remote receiver. Signal was not received in Malaysia at any time during the broadcast, hence the reason for using the remote receiver in the Netherlands.

Excerpts of this broadcast may be heard HERE and HERE.

Reception report was emailed and posted the following day after the broadast to Radio Mi Amigo International. A QSL card was promised on 14 September 2014. The following is an email that was sent to all listeners of this test transmission. QSL card arrived in the mail on 16 October 2014. 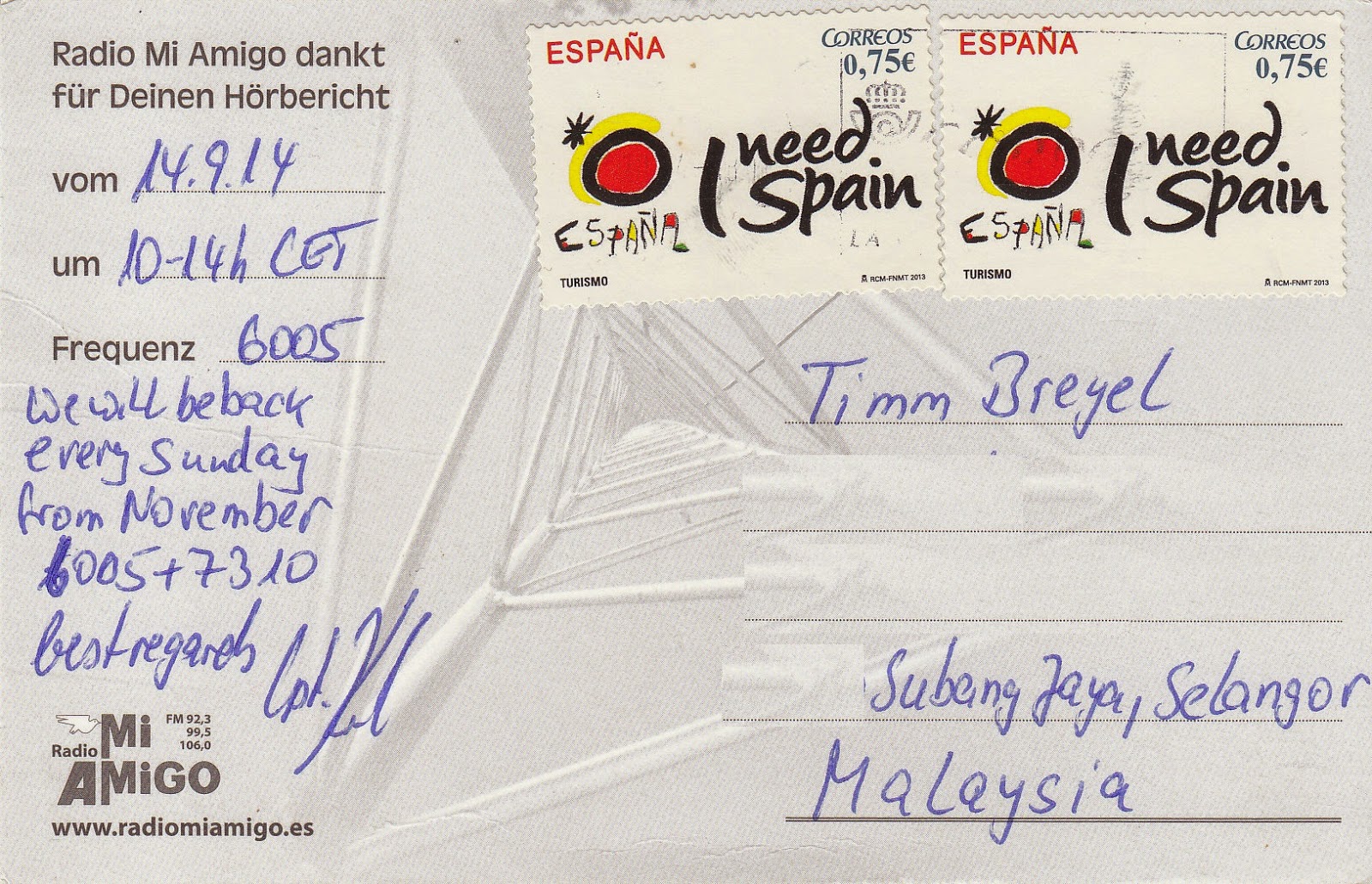 First of all, thanks a lot for your Reception Report. Sorry, but for the moment I cannot answer all those, who wrote special, but here I will try to answer all yourquestions, so everybody gets the same mail.

Your QSL Card will be on the way via post within the next week, but remember, they come from Spain, so it may take a week or so.

Next some details about oure station: The station was found in 1998 on the Canarian Island, in the Now-Time we are transmitting on 3 FM Frequencies since about 8 years at the Costa Blanca in Spain, and of course also on the Internet www.radiomiamigo.es with 2 different streams --
Stream 1: Mainstream with lots of oldies and german music
Stream 2: Alternative and independent music mixed with rare oldies.

Our test transmission on shortwave was from a place in the "Eifel" in Germany with an output of about 2 kw, the programmes are pre-recorded a day before from Studios in Spain, in Germany in Cologne and at the Bodensee, and from the Netherlands in Den Haag.

The people behind the Microphone are: Viktor Alders from Den Haag (he works for a Dutch Radio Omroep); Andy Gordon (he is into music since more than 20 years); Heronimus (he has a long experience in the German pirat radio) and myself (Captain Kord), I am the station owner, doing Radio for about 20 years now. I started radio when I was 17 in 1973, when I worked for Radio Caroline/Radio Mi Amigo in Den Haag for about 6 months, together with such great persons like Denis King, Andy Archer, Tony Allen and many more, but at that time, I did get to use a microphone :-) So, that was my idea to do a station myself, and now I do it for about 17 years.

Good news at the end: We will do regular programmes on shortwave every Sunday, beginning in November this year. We have just to think about the programmes, so if you have any ideas, just write.

Thanks once more for youre reports, and do not forget, we are on the air 24h a day via www.radiomiamigo.es and also on Facebook: radiomiamigo.costablanca. You find us also on youtube: https://www.youtube.com/user/miamigo199