WHRI - World Harvest Radio, transmitting from Cypress Creek, South Carolina, USA, was logged on 16 September 2012. An English language broadcast of news, music, frequent station ID and address announcements, and religious programming "Word for the World" was monitored from 10.03 to 10.58 UTC on 11.565 kHz..Reception (SINPO) was 25332 -- fair signal strength, clear and audible speech despite slight fading and atmospheric noise. By 10.50 UTC signal was faint with barely audible speech amidst atmospheric noise and fading.

A sound file of their transmission around 10.26 UTC can be heard HERE.

Reception report was emailed, submitted on-line and faxed to LeSea and WHRI. In the past year I have had difficulty getting a reply from WHRI/LeSea. Hopefully a confirmation from their transmitter site in Cypress Creek will be forthcoming. Several follow-up emails from Pat Sumerall confirmed and promised QSLs, but the Engineering Department failed to reply on numerous occasions. Finally, an email from WHR Engineering  (received on 21 August 2013) confirmed my reception report and mentions a QSL will be sent. The QSL card arrived on 3 September 2013 -- almost a year to the date after initially submitting the reception report to them. A second QSL card signed by the engineered (LWV) arrived in the mail on 26 December 2013. 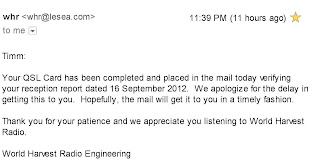